The document Sher Shah Suri UPSC Notes | EduRev is a part of the UPSC Course History for UPSC CSE.
All you need of UPSC at this link: UPSC

Sher Shah Suri was the son of a small Afghan Jagirdar near Jaunpur. The title of 'Sher Khan' was given to him by his patron for killing a tiger. He joined Babur's army and studied the methods of Mughal warfare. He defeated Humayun and came to power. Sher Shah Suri became the ruler of North India. He waged successful wars in Malwa, Rajasthan and Sind. He was a wise administrator and reorganised the military and the revenue system, improved communications, built roads and introduced the new coin, rupia. His sarais made travelling easy and safe.

To prevent the officers' undue influence, he used to transfer them every two to three years. The emperor was the head of every branch of government. He personally supervised all officers' work from the highest to the lowest. This helped in trade and commerce and served as dak chowks.

Try yourself:Sher Shah Suri was given the title of 'Sher Khan'  for ?
Explanation

Shah Suri, was emperor of North India in the Islamic Sur, his original name was Farid khan, he was a dynamic, brave and bold soldier and therefore the title of “ Sher khan” was given to him for saving the life of king of Bihar from a tiger.

Sher Shah Suri was kept informed about the developments in the empire's defferent parts. He administered justice sternly and fairly and introduced the system of local responsibility. The foundation of administrative system laid by him was continued even after his death with some changes.

Sher Shah Suri's weak successors enabled Humayun to regain the last empire. Sher Shah Suri was liberal in his religious outlook. His revenue policy was adopted not only by Akbar but also by the British. 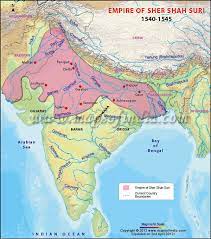 Sher Shah Suri was killed a gunpowder explsion while laying the siege to kalinjar fort in 1545. Sher Shah Suri died in 1545 after a short rule of five years but he established a vast empire and built up a fine and strong administration. The tomb he built for himself at Sasaram is a masterpiece of architecture.

Try yourself:Who was the Rani of Kittur?
Explanation

Kittur Chennamma was the Indian queen of Kittur, a princely state in present-day Karnataka. She led an armed rebellion against the British East India Company in 1824 in defiance of the doctrine of lapse in an attempt to maintain Indian control over the region, but was defeated and died imprisoned.