On completion the student will be able to

Single phase uncontrolled rectifiers are extensively used in a number of power electronic based converters. In most cases they are used to provide an intermediate unregulated dc voltage source which is further processed to obtain a regulated dc or ac output. They have, in general, been proved to be efficient and robust power stages. However, they suffer from a few disadvantages. The main among them is their inability to control the output dc voltage / current magnitude when the input ac voltage and load parameters remain fixed. They are also unidirectional in the sense that they allow electrical power to flow from the ac side to the dc side only. These two disadvantages are the direct consequences of using power diodes in these converters which can block voltage only in one direction. As will be shown in this module, these two disadvantages are overcome if the diodes are replaced by thyristors, the resulting converters are called fully controlled converters.Thyristors are semicontrolled devices which can be turned ON by applying a current pulse at its gate terminal at a desired instance. However, they cannot be turned off from the gate terminals. Therefore, the fully controlled converter continues to exhibit load dependent output voltage / current waveforms as in the case of their uncontrolled counterpart. However, since the thyristor can block forward voltage, the output voltage / current magnitude can be controlled by controlling the turn on instants of the thyristors. Working principle of thyristors based single phase fully controlled converters will be explained first in the case of a single thyristor halfwave rectifier circuit supplying an R or R-L load. However, such converters are rarely used in practice.

Full bridge is the most popular configuration used with single phase fully controlled rectifiers. Analysis and performance of this rectifier supplying an R-L-E load (which may represent a dc motor) will be studied in detail in this lesson. Fig 10.2 (a) and (b) shows the circuit diagram and the waveforms of a single phase fully controlled halfwave rectifier supplying a resistive inductive load. Although this circuit is hardly used in practice its analysis does provide useful insight into the operation of fully controlled rectifiers which will help to appreciate the operation of single phase bridge converters to be discussed later. 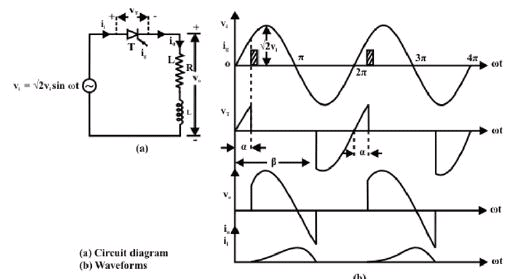 Fig 10.3 (a) shows the circuit diagram of a single phase fully controlled bridge converter. It is one of the most popular converter circuits and is widely used in the speed control of separately excited dc machines. Indeed, the R-L-E load shown in this figure may represent the electrical equivalent circuit of a separately excited dc motor.

The single phase fully controlled bridge converter is obtained by replacing all the diode of the corresponding uncontrolled converter by thyristors. Thyristors T1 and T2 are fired together while T3 and T4 are fired 180º after T1 and T2. From the circuit diagram of Fig 10.3(a) it is clear that for any load current to flow at least one thyristor from the top group (T1, T3) and one thyristor from the bottom group (T2, T4) must conduct. It can also be argued that neither T1T3 nor T2T4 can conduct simultaneously. For example whenever T3 and T4 are in the forward blocking state and a gate pulse is applied to them, they turn ON and at the same time a negative voltage is applied across T1 and T2 commutating them immediately. Similar argument holds for T1 and T2.

Consequently the converter is said to be operating in the discontinuous conduction mode.

Fig 10.3(b) shows the voltage across different devices and the dc output voltage during each of these conduction modes. It is to be noted that whenever T1 and T2 conducts, the voltage across T3 and T4 becomes -vi. Therefore T3 and T4 can be fired only when vi is negative i.e, over the negative half cycle of the input supply voltage. Similarly T1 and T2 can be fired only over the positive half cycle of the input supply. The voltage across the devices when none of the thyristors conduct depends on the off state impedance of each device. The values listed in Fig 10.3 (b) assume identical devices.Under normal operating condition of the converter the load current may or may not remain zero over some interval of the input voltage cycle. If i0 is always greater than zero then the converter is said to be operating in the continuous conduction mode. In this mode of operation of the converter T1T2 and T3T4 conducts for alternate half cycle of the input supply.However, in the discontinuous conduction mode none of the thyristors conduct over some portion of the input cycle. The load current remains zero during that period.

Operation in the continuous conduction mode

As has been explained earlier in the continuous conduction mode of operation i0 never becomes zero, therefore, either T1T2 or T3T4 conducts. Fig 10.4 shows the waveforms of different variables in the steady state. The firing angle of the converter is . The angle is given by It is assumed that at ωt = 0 - T3T4 was conducting. As T1T2 are fired at ωt =  α they turn on commutating T3T4 immediately. T3T4 are again fired at ωt = π + α . Till this point T1T2conducts. The period of conduction of different thyristors are pictorially depicted in the second waveform (also called the conduction diagram) of Fig 10.4. 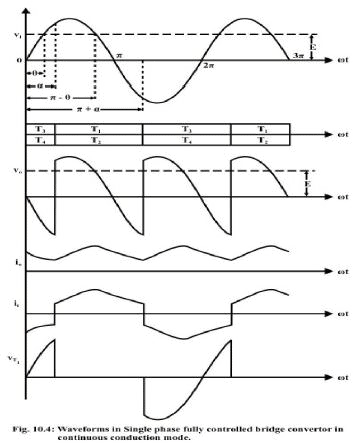 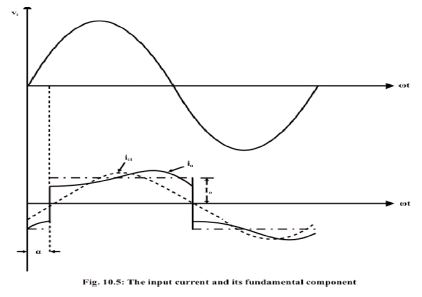 It will be of interest to find out a Fourier series expression of ii. However, using actual expression for ii will lead to exceedingly complex calculation. Significant simplification can be made by replacing i0 with its average value I0. This will be justified provided the load is highly inductive and the ripple on i0 is negligible compared to I0. Under this assumption the idealized waveform of ii becomes a square wave with transitions at ωt = α and ωt = π + α as shown in Fig 10.5. ii1 is the fundantal component of this idealized ii. Evidently the input current displacement factor defined as the cosine of the angle between input voltage (vi) and the fundamental component of input current (ii1) waveforms is cos (lagging).

Therefore, the rectifier appears as a lagging power factor load to the input ac system. Larger the '' poorer is the power factor.The input current ii also contain significant amount of harmonic current (3rd, 5th, etc) and therefore appears as a harmonic source to the utility. Exact composition of the harmonic currents can be obtained by Fourier series analysis of ii and is left as an exercise.

Fill in the blank(s) with the appropriate word(s).

ii) In the continuous conduction mode at least _________ thyristors conduct at all times.

iii) In the continuous conduction mode the output voltage waveform does not depend on the ________ parameters.

iv) The minimum frequency of the output voltage harmonic in a single phase fully controlled bridge converter is _________ the input supply frequency.

v) The input displacement factor of a single phase fully controlled bridge converter in the continuous conduction mode is equal to the cosine of the ________ angle.

Operation in the discontinuous conduction mode