Question 1:Do all cells use oxygen to produce energy ?Solution :No.

Question 4:In which type of respiration, aerobic or anaerobic, more energy is released ?Solution :Aerobic respiration.

Question 5:Name the substance whose build up in the muscles during vigorous physical exercise may cause cramps.Solution :Lactic acid.

Question 6:Which part of roots is involved in the exchange of respiratory gases ?Solution :Root hairs.

Question 7:Name the process by which plant parts like roots, stems, and leaves get oxygen required for respiration.Solution :Diffusion.

Question 8:Name the pores in a leaf through which respiratory exchange of gases takes place.Solution :Stomata.

Question 9:Name the areas in a woody stem through which respiratory exchange of gases takes place.Solution :Lenticels.

Question 10:What is the name of the extensions of the epidermal cells of a root which help in respiration ?Solution :Root hair.

Question 11:Out of photosynthesis and respiration in plants, which process occurs :(a) all the time ?(b) only at daytime ?Solution :(a) Respiration.(b) Photosynthesis.

Question 12:Name the organs of breathing in fish.Solution :Gills.

Question 13:Name an animal which absorbs oxygen through its moist skin.Solution :Earthworm.

Question 14:Name an animal which depends on simple diffusion of gases for breathing.Solution :Amoeba.

Question 16:The trachea divides into two tubes at its lower end. What is the name of these tubes ?Solution :Bronchi.

Question 17:Where does the blood absorb oxygen in the human body ?Solution :Alveoli.

Question 19:Which gases are exchanged in your lungs ?Solution :Oxygen and carbon dioxide.

Question 20:Where in the lungs does gas exchange take place ?Solution :Alveoli.

Question 21:What is the name of tiny air-sacs at the end of smallest bronchioles in the lungs ?Solution :Alveoli.

Question 22:What is the other name of wind-pipe ?Solution :Trachea.

Question 23:What organs are attached to the two bronchi ?Solution :Lungs.

Question 25:State whether the following statements are true or false :(a) During respiration, the plants take C02 and release 02.(b) Energy can be produced in cells without oxygen.(c) Fish and earthworm exchange gases during respiration in the same way.Solution :(a) False.(b) True.(c) False.

Question 26:Fill in the following blanks with suitable words :(a) The organs of respiration in man are the…………..(b) The actual exchange of gases takes place in the………… of the lungs.(c) ………………in the lungs provide a very large surface area for gaseous exchange.(d) Yeast undergoes……….. respiration whereas Amoeba undergoes………….. respiration.(e) Gills are the breathing organs in…………..Solution :(a) Lungs.(b) Alveoli.(c) Alveoli.(d) Anaerobic, aerobic.(e) Fish.

Question 29:Name the final product/products obtained in the anaerobic respiration, if it takes place :(a) in a plant (like yeast).(b) in an animal tissue (like muscles).Solution :(a) Ethanol and carbon dioxide.(b) Lactic acid. 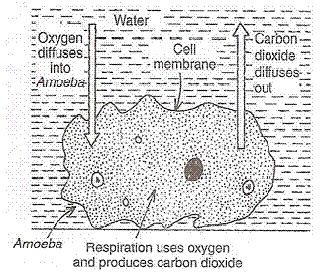 Diagram to show the process of breathing

(b) It is aerobic respiration.

Question 38:Describe the process of respiration in fish.Solution :Respiration and fish: The fish has special organ of breathing called gills on both the sides of its head. The gills are covered by gill covers. The fish lives in water which contains dissolved oxygen. The fish breathes by taking in water through its mouth and sending it over the gills. When water passes over the gills, the gills extract dissolved oxygen from the water. The extracted oxygen is absorbed by the blood and carried to all the parts of the fish. The carbon dioxide produced by respiration is brought back by the blood into the gills for expelling into the surrounding water. 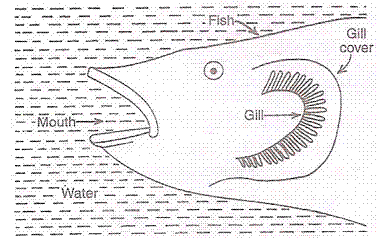 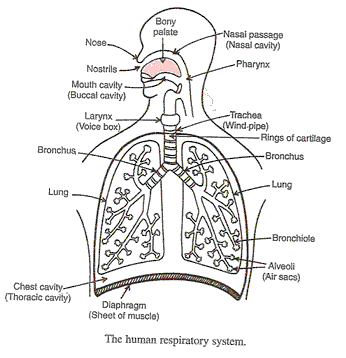 Question 48:(a) Explain how, the air we breathe in gets cleaned while passing through the nasal passage.(b) Why do the walls of trachea not collapse when there is less air in it ?(c) How are oxygen and carbon dioxide exchanged in our body during respiration ?(d) How are lungs designed in human beings to maximise the exchange of gases ?Solution :(a) When air passes through the nasal passage, the dust particles and other impurities present in it are trapped by nasal hair and mucus so that clean air goes into the lungs.(b) Trachea does not collapse even when there is no air in it because it is supported by rings of soft bones called cartilage.(c) During the process of ‘breathing in’ the air sacs or alveoli of the lungs get filled with air containing oxygen. The alveoli are surrounded by capillaries carrying blood so the oxygen of air diffuses from the alveoli walls into the blood from where it is carried to all the parts of the body.As the blood passes through the tissues of the body, the oxygen present in it diffuses into the cells. This oxygen combines with the digested food to release energy. Carbon dioxide gas is produced as a waste product during respiration in the cells of the body tissues which diffuses into the blood. Blood carries the carbon dioxide back to the lungs where it diffuses into the alveoli.(d) The human lungs have been designed to maximise the exchange of gases as there are millions of alveoli in the lungs which provides a large surface area for the exchange of gases.

Question 1:What is the name of tissues which transport :(a) food in a plant ?(b) water and minerals in a plant ?Solution :(a) Phloem.(b) Xylem.

Question 2:What substance/substances are transported in plants by :(a) xylem vessels and tracheids ?(b) sieve tubes (or phloem) ?Solution :(a) Water.(b) Food.

Question 3:Which organ acts as a pump in the circulatory system ?Solution :Heart.

Question 4:Veins and arteries carry blood. Which of these carry blood :(a) away from the heart ?(b) back to the heart ?Solution :(a) Arteries.(b) Veins.

Question 9:Where is the dirty blood in our body filtered ?Solution :Glomerulus present in kidneys.

Question 10:Name the procedure used in the working of artificial kidney.Solution :Dialysis.

Question 11:From the following terms, choose one term which includes the other four :Plasma, Platelets, Blood, RBC, WBCSolution :Blood.

Question 12:What are the components of the transport system in highly organised plants ?Solution :Xylem and phloem.

Question 13:Out of xylem and phloem, which one carries materials :(a) upwards as well as downwards ?(b) only upwards ?Solution :(a) Phloem.(b) Xylem.

Question 14:Name two liquids which help in the transport of substances in the human body.Solution :Blood and lymph.

Question 15:What is the other name of main vein ?Solution :Vena Cava.

Question 16:Name the conducting tissue of plants which is made of sieve tubes alongwith companion cells.Solution :Phloem.

Question 17:Name the conducting tissue in plants which is made of (a) living cells, and (b) dead cells.Solution :(a) Phloem.(b) Xylem.

Question 18:State the term used for the transport of food from leaves to other parts of plant.Solution :Translocation.

Question 23:State whether the following statements are true or false :(a) Some organisms store wastes in body parts.(b) The value of systolic pressure is always lower than that of diastolic pressure.Solution :(a) True.(b) False.

Question 26:Name the two waste products of the human body which are produced in the body cells.Solution :Carbon dioxide and urea.

Question 27:What is the role of glomerulus in the kidney ?Solution :The function of glomerulus is to filter the blood passing through it and initiate urine formation.

Question 28:What is the the other name of ‘high blood pressure’ ?Solution :Hypertension.

Question 29:Fill in the following blanks with suitable words :(a) Gums and resins are the………….. products of plants.(b) Bowman’s capsule and tubule taken together make a…………….(c) The organs which extract the nitrogenous wastes from the blood are……………….(d) The extracellular fluid which always flows from body tissues to the heart is called…………………(e) The………… blood cells make antibodies whereas…………… blood cells help in respiration.Solution :(a) Waste.(b) Nephron.(c) Kidneys.(d) Lymph.(e) White, red.

Question 30:What is xylem tissue ? Name the two kinds of cells in xylem tissue. State whether these cells are living or dead.Solution :Xylem tissue is a vascular tissue in plants which carries water and minerals from the roots to the various of the plant. Xylem tissue has two types of cells ? Xylem vessels and tracheids. Both these tissues are dead cells.

Question 31:What is phloem tissue ? Phloem contains two types of cells joined side by side. Name these two types of cells. State whether these cells are living or dead.Solution :Phloem tissue is a vascular tissue which transports the food materials made in the leaves to the other parts of the plant. Phloem is made up of many cells joined end to end to form long tubes. The cells of the phloem are sieve tubes and companion cell. These are living cells.

Question 33:(a) Draw a labelled diagram of (z) a xylem vessel, and (ii) a sieve tube (or phloem).(b) What are the differences between the transport of materials in xylem and phloem ?Solution : 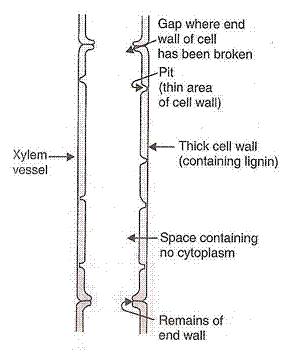 The Structure of xylem vessels 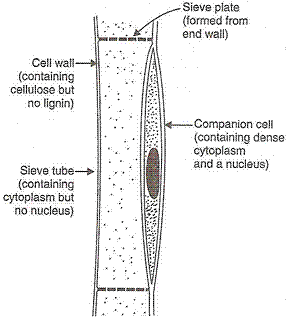 The Structure of phloem (made of sieve tubes)

Question 36:(a) What job is done by the kidneys ?(b) What do kidneys excrete ?(c) What is the name of the tubes which connect the kidneys to bladder ?(d) What does the bladder in our body do ?Solution :(a) The kidneys remove the poisonous substance urea, other waste salts and excess water from the blood in the form of yellowish liquid called urine.(b) Urea.(c) Ureters.(d) Urinary bladder is a bag which stores the urine temporarily till it is excreted out.

Question 37:Why do some people need to use a dialysis machine ? What does the machine do ?Solution :When there is a kidney failure then dialysis machine is used. Dialysis cleans the blood of a person by separating the waste substance (urea) from the blood.