Question 2: What are the two ways in which you can trace the magnetic field pattern of a bar magnet ?

Question 4: State whether the following statement is true or false :
The axis of earth’s imaginary magnet and the geographical axis coincide with each other.

Solution :
False
The axis of earth’s imaginary magnet is inclined at an angle of 15o with the geographical axis.

Question 5: Why does a compass needle get deflected when brought near a bar magnet ?

Solution : Manufacturers use a magnetic strip in the refrigerator’s door to keep it closed properly.

Question 7:
Fill in the following blanks with suitable words :
(a) Magnetic field lines leave the………….. pole of a bar magnet and enter at its……………
(b) The earth’s magnetic field is rather like that of a………….. magnet with its……….. pole in the northern hemisphere.

Question 8: Draw a diagram to show the magnetic field lines around a bar magnet. 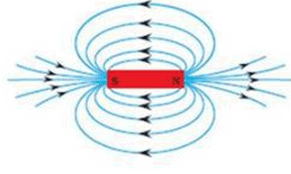 Question 10: Explain why, two magnetic field lines do not intersect each other.

Solution : Two magnetic field lines do not intersect each other due to the fact that the resultant force on a north pole at any point can be only in one direction. But if the two magnetic lines get intersect one another, this means that resultant force on a north pole placed at the point of interection will be along two directions, which is not possible.

Solution : Because the strength of magnetic field produced by the cable is quite weak.

Question 12: (a) Define magnetic field lines. Describe an activity to draw a magnetic field line outside a bar magnet from one pole to another pole.
(b) Explain why, a freely suspended magnet always points in the north-south direction.