A radical trend of a militant nationalist approach to political activity started emerging in the 1890s and it took a concrete shape by 1905. As an adjunct to this trend, a revolutionary wing also took shape

➢ Recognition of the True Nature of British Rule

➢ Growth of Confidence and Self-Respect

➢ Dissatisfaction with Achievements of Moderates

➢ Existence of a Militant School of Thought

➢ The Emergence of a Trained Leadership

The Swadeshi and Boycott Movement

The Swadeshi Movement had its genesis in the anti-partition movement which was started to oppose the British decision to partition Bengal.

➢ The Movement under Extremist Leadership

➢ The Extent of Mass Participation

➢ Evaluation of the Swadeshi Movement 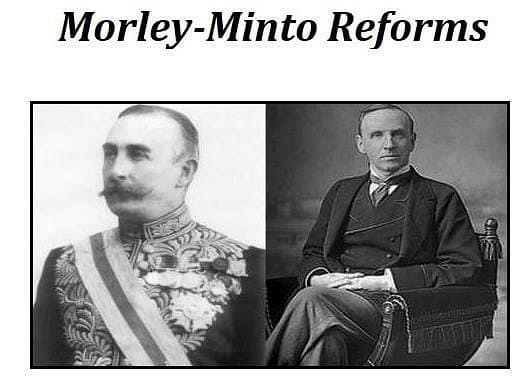 Minto at left and Morley at right

To test yourself on the topic of "The Era of Militant Nationalism", you just read, attempt the test given below: