The document State Council of Ministers - Indian Polity Notes | EduRev is a part of the UPSC Course Indian Polity for UPSC CSE.
All you need of UPSC at this link: UPSC

How are the Council of Ministers appointed?They are appointed by the governor on the advice of the CM. Governor also appoints a tribal affairs minister for the following states:

Note: Bihar was also one of the states to have tribal affairs minister, however, 94th Amendment Act 2006 freed Bihar from this obligation.

Collective ResponsibilityThe provision of collective responsibility is dealt with by Article 164. The Article mentions that the council of ministers are collectively responsible to the state legislature. (To read more about the important articles in the Indian Constitution, refer to the linked article.) This means that all the ministers own joint responsibility to the legislative assembly for all their acts of omission and commission.

Articles related to State Council of MinistersThe following articles of the Indian Constitution are important to be read by the aspirants for UPSC 2020. These articles are attached to the council of ministers. Refer to these in the table given below: 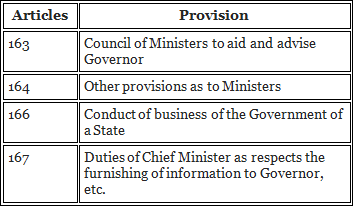 Other provisions as to the formation of Council of Ministers are provided by Article 164.

We shall see other provision of Art. 164 in simplified manner as below:

(1A) Provision for tribal ministers in some states: In the States of Chhattisgarh, Jharkhand, Madhya Pradesh and Orissa (Bihar was omitted by 94th amendment act, 2006), there shall be a Minister in charge of tribal welfare who may in addition be in charge of the welfare of the Scheduled Castes and backward classes or any other work.

(1B) Disqualification under 10th Schedule: A person who is disqualified for being a member of Legislature under Tenth Schedule shall also be disqualified to be appointed as a Minister; he will have to seek a fresh election in order to become a minister again.

(2) Collective responsibility: The Council of Ministers shall be collectively responsible to the Legislative Assembly of the State.

(3) Oath: Before a Minister enters upon his office, the Governor shall administer to him the oaths of office and of secrecy according to the forms set out for the purpose in the Third Schedule.

(4) Condition of becoming a member of legislature: A Minister who for any period of six consecutive months is not a member of the Legislature of the State shall at the expiration of that period cease to be a Minister. 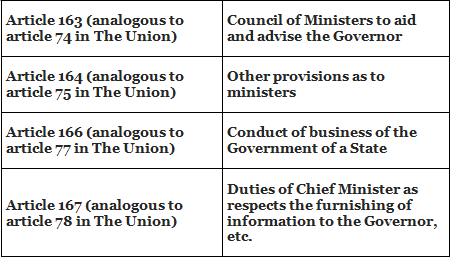