Tax is a mode of income redistribution

The point where tax looks being imposed is known as the incidence of tax- the event of tax imposition.

The point where tax makes its effect felt is known as the impact of tax- the after effect of tax imposition. 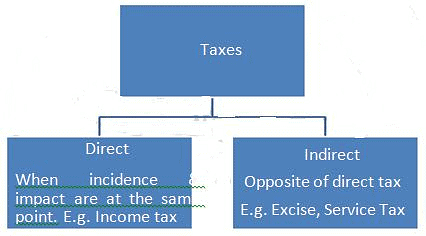 I. Raise revenue needed by the government

It was introduced in 1986 on the recommendation of the Jha committee with the objective of nationalizing excise duty structure and reducing the cascading effect of excise duty.

Under it the manufacturer gets complete reimbursement of excise duty (only) paid by them on inputs like components and raw materials.

VAT on the other hand is a much more comprehensive tax which includes in its purview taxes like excise duties, sales tax, turnover tax etc.

Recommendation of the 13th finance Commission on GST

The tax was introduced with only 3 services liable for taxation, gradually extended to over 100 services by 2007-08.