Mains: GS 3Sub Topic: Science and Technology- Developments and their Applications and Effects in Everyday LifeContextUnion Health Minister Harsh Vardhan on Sunday cautioned that the Indian Council of Medical Research’s first COVID19 serosurvey should not create a sense of complacency among the people concerning the virus.Serosurvey

Collection and testing of serum (or proxy such as an oral fluid) specimens from a sample of a defined population over a specified period to estimate the prevalence of antibodies against a given specific infectious pathogen as an indicator of immunity. 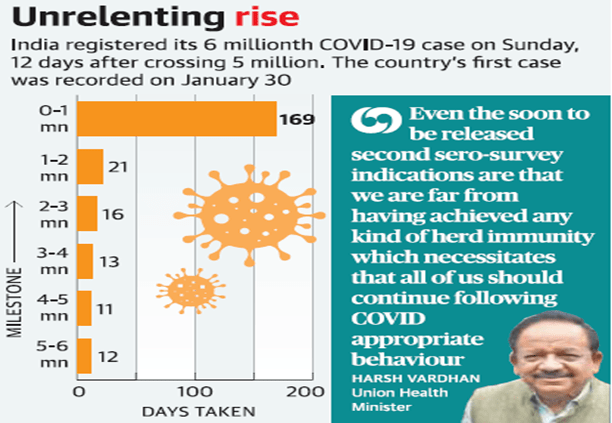 Key particularsRemdesivir(i) Remdesivir is an investigational nucleotide analog with broad-spectrum antiviral activity(ii) it is not approved anywhere globally for any use.(iii) Remdesivir has demonstrated in vitro and in vivo activity in animal models against the viral pathogens MERS and SARS, which are also coronaviruses and are structurally similar to COVID-19.(iv) The limited preclinical data on remdesivir in MERS and SARS indicate that remdesivir may have potential activity against COVID-19.Plasma therapy(i) The convalescent plasma therapy aims at using antibodies from the blood of a recovered Covid-19 patient to treat those critically affected by the virus.(ii) The therapy can also be used to immunise those at a high risk of contracting the virus — such as health workers, families of patients and other high-risk contacts.

The Pradhan Mantri Swasthya Suraksha Yojana schemeIt was announced in 2003 with the objectives of correcting regional imbalances in the availability of affordable/ reliable tertiary healthcare services and also to augment facilities for quality medical education in the country.

Try yourself:Consider the following statements:
(i) Remdesivir has been approved by the WHO for COVID-19 treatment.
(ii) The convalescent plasma therapy aims at using antibodies from the blood of a recovered malaria patient to treat critically affected coronavirus patient.

Statement 1 is incorrect
Remdesivir is an investigational nucleotide analog with broad-spectrum antiviral activity, it is not approved anywhere globally for any use.

Statement 2 is incorrect
The convalescent plasma therapy aims at using antibodies from the blood of a recovered Covid-19 patient to treat those critically affected by the virus. 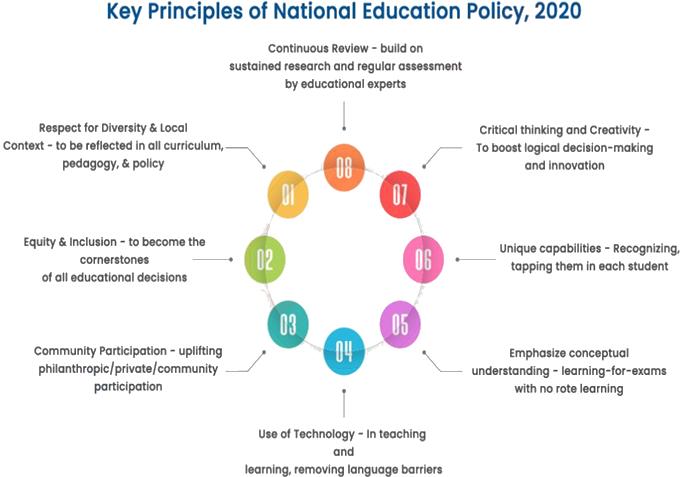 Key particulars(i) The new National Education Policy (NEP) 2020  is required to undertaking major reforms that bring the highest quality, equity and integrity into the system, from early childhood care and education through higher education”.(ii) It represents the key to a more vibrant, socially engaged, cooperative communities and a happier, cohesive, cultured, productive, innovative, progressive, and prosperous nation”.(iii) It states that the aim is to train health care professionals “primarily required for working in primary care and secondary hospitals.”On private entities(i) Faced with public demand for high-quality medical care on the one hand and severe constraints on public resources on the other, private entities have been permitted to establish medical educational institutions to supplement government efforts.(ii) Though they are supposed to be not-for-profit, taking advantage of the poor regulatory apparatus and the ability to both tweak and create rules, these private entities, with very few exceptions, completely commercialized education.(iii) None of the three stated objectives of medical education has been achieved by the private sector — that is, providing healthcare personnel in all parts of the country, ensuring quality and improving equity.(iv) It was in this situation that the board of governors, which replaced the Medical Council of India, as an interim before the National Medical Commission became operative, introduced the National EligibilitycumEntrance Test (Undergraduate), or NEET-UG, as a single all  India gateway for admission to medical colleges.

(i) It is an Indian regulatory body of 33 members which regulates medical education and medical professionals.(ii) It replaced the Medical Council of India on 25 September 2020.(iii) The Commission grants recognition of medical qualifications, gives accreditation to medical schools, grants registration to medical practitioners, and monitors medical practice and assess the medical infrastructure in India

NEET has worsened equity.(i) The basic cause of inequity in admission to higher educational institutions is the absence of a high-quality school system accessible to all.(ii) In medical education, the situation is made far worse by the rent-seeking and profiteering of the majority of private medical colleges.Way forwardOnly a resolute government, determined to ensure that economic policy facilitates quality and equity in education, can do it.

Try yourself:Consider the following statements concerning National Medical Commission:
1. It is an Indian regulatory body of 33 members
2. It replaced the medical council of India in 2015.

Statement 1 is correct
It is an Indian regulatory body of 33 members which regulates medical education and medical professionals.

Statement 2 is incorrect
It replaced the Medical Council of India on 25 September 2020. The Commission grants recognition of medical qualifications, gives accreditation to medical schools, grants registration to medical practitioners, and monitors medical practice and assess the medical infrastructure in India

News: The benefits of a carbon tax Key particulars(i) China has announced that it would balance out its carbon emissions with measures to offset them before 2060.(ii) In carbon emissions ranking China is ranked 1st and USA and India ranked 2nd and 3rd respectively in the global ranking.Global warming impact(i) Record heatwaves in Delhi and floods in southwest China, and catastrophic forest fires in California this year are indicative of the existential danger from global warming.

(i) The annually published Global Climate Risk Index analyses to what extent countries have been affected by the impacts of weather-related loss events (storms, floods, heat waves etc.).(ii) The Global Climate Risk Index (CRI) developed by Germanwatch analyses quantified impacts of extreme weather events.(iii) Extreme events are analysed both in terms of fatalities as well as economic losses that occurred.(iv) The analysis is based on data from the Munich Re NatCatSERVICE, which is considered worldwide as one of the most reliable and complete databases on this matter.

Government actions(i) India has committed to 40% of electricity capacity being from nonfossil fuels by 2030, and lowering the ratio of emissions to GDP by one-third from 2005 levels.(ii) Government incentives for electric vehicles, and an environmental tax in the 202021 budget.(iii) A carbon tax at $35 per tonne of CO2 emissions in India is estimated to be capable of generating some 2% of GDP through 2030.Carbon tax

A carbon tax is a tax on carbon emissions and is a type of pollution tax used to cut CO2 emissions and provide an incentive to switch to cleaner energy.

Try yourself:“The Global Climate Risk Index” is released by which of the following?
Explanation

Key particulars(i) This is the first exercise following the conclusion of the mutual logistics support agreement early this month with Japan.(ii) “JIMEX20 will showcase a high degree of interoperability and joint operational skills through the conduct of a multitude of advanced exercises, across the spectrum of maritime operations,”(iii) The Navy has deployed indigenous stealth destroyer INS Chennai, stealth frigate INS Tarkash and fleet Tanker Deepak.

Try yourself:The term “JIMEX 20” is sometimes mentioned in the news in the context of the affairs of
Explanation

Clashes erupted between Armenia and Azerbaijan on Sunday over the volatile Nagorno-Karabakh region, reigniting concern about instability in the South Caucasus, a corridor for pipelines transporting oil and gas to world markets. 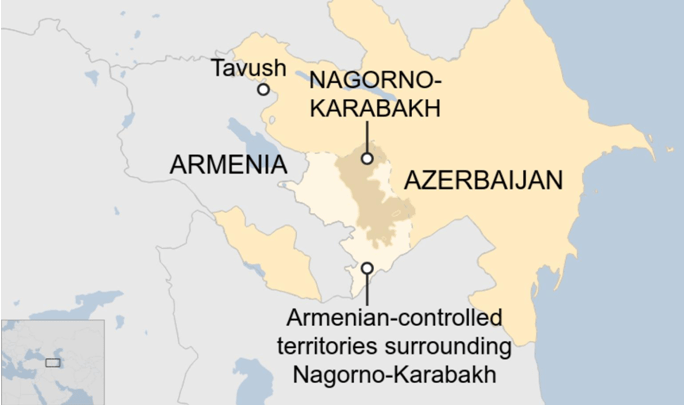 Try yourself:The Region Nagorno-Karabakh has seen in the news in context conflict between which of the following countries?
Explanation

Armenia and Azerbaijan dispute
The conflict started in 1988 when the Karabakh Armenians demanded transfer of Karabakh from Soviet Azerbaijan to Soviet Armenia. The enclave of Nagorno-Karabakh had held a referendum which was boycotted by Azerbaijan.