Context(i) Affordable smartphones and Internet access have made India a digital nation with an estimated 750 million connections and a thriving financial technology sector.(ii) Citizens inured(used to) to queues at utility offices even to pay routine bills find this a major leap, thanks to fintech. 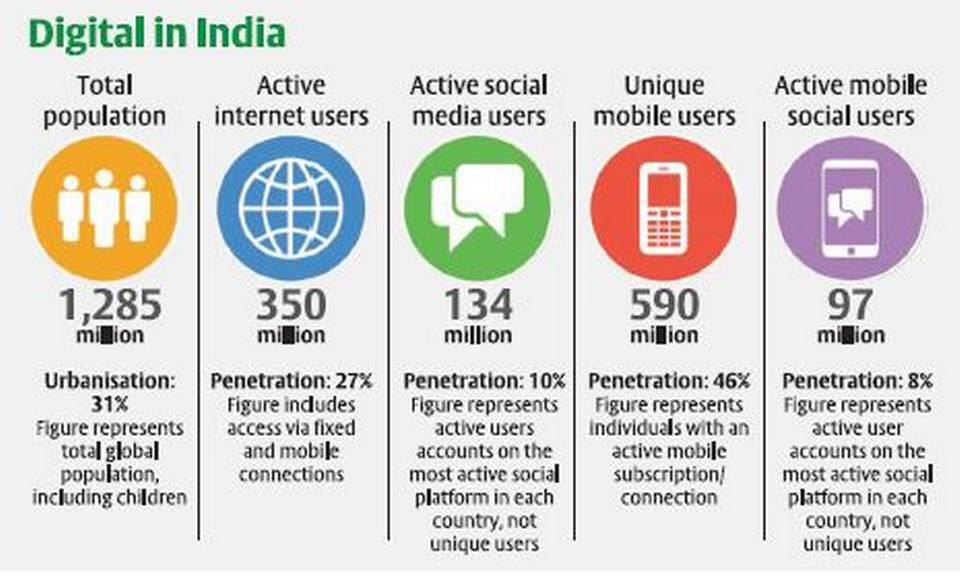 Welcome Advance(i) Digital platforms providing goods and services, including online education and telemedicine, have grown vigorously during the COVID-19 pandemic, while many professionals have maintained productivity by working from home.(ii) Yet, it would be premature to declare digital as a way of life in India, as Prime Minister Narendra Modi put it at the Bengaluru Tech Summit.(iii) The true measure of digital nations is the readiness of governments to use technology to create open, participatory public systems that citizens consider trustworthy.(iv) What governance must achieve is a reliable system of digital welfare.(v) A beginning has, no doubt, been made through government-to-citizen services using Common Service Centres, advice to agriculturists, digital payments of welfare benefits through bank accounts and, even legal advice online to four lakh people under the Tele-Law scheme.(vi) These represent a welcome advance, but if digital methods were applied to other sectors, such as road safety, the results could be dramatic — potentially reducing the accident mortality(death) rate of about 1,50,000 deaths a year.

Tranforming Internal Process(i) In the ongoing pandemic, Mr. Modi’s forecast for enhanced adoption of technology in health and education will have resonance(impact), although this was always a priority.(ii) In fact, successive governments failed to grasp the promise of achieving universal health coverage (UHC) by 2022, for which the erstwhile Planning Commission presented a road map a decade ago.(iii) Now, the nucleus plan is Ayushman Bharat, with a digital health identity for all.(iv) With the emphasis on digitalisation, it should be possible to achieve measurable progress early on at least on one UHC component — access to free, essential prescription drugs.(v) A digital health ID would help prescribe and dispense essential medicines free.(vi) The Planning Commission estimated that the public procurement cost for this, in 2011, would be 0.1% to 0.5% of GDP.(vii) If this is a medium-term goal, the more immediate task of distributing COVID-19 vaccines looms as a test for the government.(viii) At a broader level, efficient digital government depends on transforming internal processes, and fixing deadlines for service delivery.(ix) If digital has to become a way of life, redefining the labyrinthine(complicated)  functioning of citizen-centric services would be a good place to start, with deadlines for government departments.

ConclusionThe true measure of digitalisation would be seamless delivery of all citizen services.2. INDIA’S NO TO RCEP COULD STILL BE A NO-

Context(i) Last week, 15 East Asian countries agreed to take their economic integration several notches(steps) higher by forging(building) the Regional Comprehensive Economic Partnership (RCEP), the largest free trade agreement (FTA) ever.(ii) In 2019, RCEP members accounted for about 30% of world output and population and 28% of world trade.(iii) But more importantly, about 44% of their total trade was intra-RCEP, which is a major incentive for the members of this agreement to agree to the deal for this could contribute to the strengthening of the regional value chains.(iv) This may well prove propitious(favourable) for the RCEP member countries in their efforts to recover from the downturn.(v) RCEP negotiations were for investments “to cover the four pillars of promotion, protection, facilitation and liberalization”.(vi) It was, therefore, quite clear that the RCEP participating countries (RPCs) had given themselves an ambitious agenda of trade and investment liberalisation. 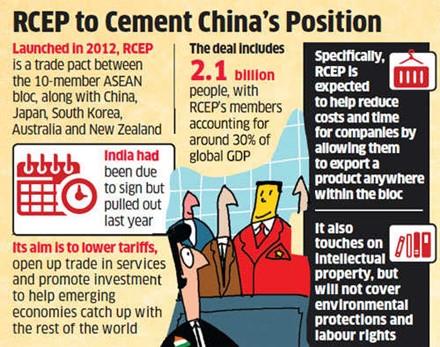 A Comparison With The Tpp(i) Several commentators have observed that RCEP is not likely to usher in comprehensive economic integration in East Asia.(ii) It appears that this view has arisen by comparing RCEP with the Trans-Pacific Partnership (TPP), which would have been the world’s most extensive FTA in terms of market opening had the Trump Administration decided not to abandon(give it up) it.(iii) But there have always been doubts whether the TPP was promoting “free trade” or a highly discriminatory “managed trade”.(iv) This was because the TPP included several regulatory issues including the controversial labour and environmental standards and issues such as “anti-corruption”, all of which could raise regulatory barriers and severely impede(restrict) trade flows.(v) In contrast, RCEP includes traditional market access issues, following the template provided by the World Trade Organization (WTO).(vi) However, it also includes issues that are currently being discussed by several groups of WTO members as a part of their agenda to “reform the multilateral trading system”.(vii) These issues are electronic commerce, investment facilitation, which seems to be the first step towards a multilateral agreement on investment and creating an enabling environment for the participation of small and medium enterprises in global trade.(viii) While India has been opposed to the inclusion of all these issues in the WTO, the formation of RCEP could provide serious momentum to the discussions in Geneva, especially after the Organization convenes under its new Director General.

Re-Engaging India:(i) In the months following India’s disengagement from RCEP negotiations, several RPCs had expressed their strong desire to get India re-engaged.(ii) These efforts are now “official”: prior to the signing of the deal, RCEP Ministers adopted a Declaration on India’s Participation in the agreement through which the door has been left open to India to join RCEP Agreement as an original signatory.(iii) Further, India has been invited to participate in RCEP meetings as an observer and in economic cooperation activities undertaken by RCEP members.(iv) And, finally, RCEP members have agreed to commence negotiations with India once India submits a request in writing of its intention to accede(agree) to the agreement(v) The question is, have the circumstances under which India had distanced itself from the RCEP negotiations become any better for it to join the agreement in the near future?(vi) The answer seems to be unambiguously(not confused) in the negative on two counts.(vii) The first is that during the RCEP negotiations, India had raised a number of concerns, two of which, namely, the levels of market access it was expected to provide, especially the deep cuts in tariffs on imports from China, and provisions relating to the investment chapter, have become even more significant over the past several months.(viii) Since the border clashes, India has imposed a number of import restrictions on Chinese products and has also subjected investment flows from its northern neighbour to greater scrutiny(examination).(ix) Both these measures would have been infructuous(not fruitful) if India were a party to the RCEP.(x) Second, India’s initiative for its economic turnaround, the Atmanirbhar Bharat Abhiyan, is primarily focused on strengthening domestic value chains, while RCEP, like any other FTA is solely focused on promoting regional value chains.3. THE ‘TIME USE SURVEY’ AS AN OPPORTUNITY LOST-

Context(i) The all India Time Use Survey, 2019 has just been published by the Government of India.(ii) As a survey that has covered the entire country for the first time, the National Statistical Office needs to be complimented(praised) for accomplishing the task.(iii) The “Time Use Survey, or TUS, provides a framework for measuring time dispositions by the population on different activities.(iv) Its primary objective is to measure participation of men and women in paid and unpaid activities.(v) TUS is an important source of information on the time spent in unpaid care-giving activities, volunteer work, unpaid domestic service producing activities of the household members.(vi) It also provides information on time spent on learning, socializing, leisure activities, self-care activities, etc., by the household members”. 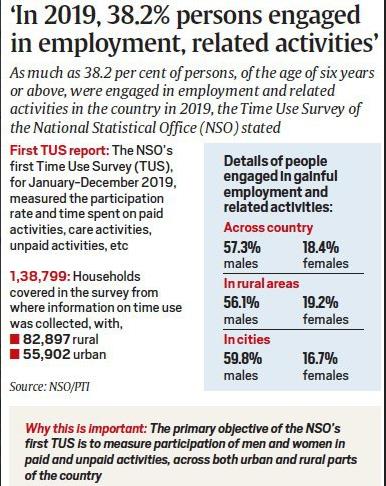 Key Developments(i) Two recent developments which have pushed up the demand for TUS globally are the commitment to achieving the Sustainable Development Goals (SDG) by 2030, and the path-breaking Resolution of the 19th International Conference on Labour Statistics, on “Statistics of Work, Employment and Labour Underutilization — International Labour Organization 2013”.(ii) The Government of India is fully committed to the SDGs and has also indicated its inclination to implementing the second.(iii) TUS data are also required for understanding and monitoring major socioeconomic concerns of countries. Somehow, both these developments have not been incorporated in this first time use survey.(iv) Time use data are needed for implementing not only the SDG 5.4 on unpaid work, but also for implementing the SDG-1 to the SDG-10.(v) Even for the SDG 5.4 — considered to be the most important SDG for measuring and valuing unpaid domestic services and unpaid care by women and men, and reducing unpaid work through public services and infrastructure — the Indian TUS data are not adequate.(vi) This accounting requires information on the assets of a household that includes assets used in domestic services, vehicles used in travel and commuting, and consumer durables, etc.(vii) The accounting also requires wage rates prevailing in different locations. Unfortunately, this information is not collected by this TUS in the background questionnaire.(viii) In the absence of this information, valuation will not be feasible in satellite accounts.(ix) Since there is no data collected on the ownership of the assets by gender, valuation by gender will not be feasible.

Defining Work(i) The ILO’s Resolution — referred to above — presents a new definition of work, new forms of work and a new labour force status classification.(ii) It defines “work” as “any activity performed by persons of any sex and age to produce goods or provide services for use by others or own use”.(iii) “Work” is divided into five categories:(a) employment (production of goods and services for pay, profit or barter);(b) own use production of goods and services by households;(c) unpaid trainee work, volunteer work;(d) and other work (compulsory work performed without pay to produce goods/services for others).(iv) Unpaid domestic services and unpaid care are now formally recognised as “work” for the first time.

Breaks In Indian Surveys(i) Experts have always argued that Indian Employment/Unemployment Surveys, or EUS, tend to under-report informal workers, due to the nature of informal employment.(ii) Being frequently intermittent, scattered, temporary, short term or unstable, it is frequently not reported accurately by the EUS.(iii) Again, women frequently view work as a part of household work and under-report it.(iv) Also, the EUS are not equipped to collect data on multiple jobs performed by people, the time spent on work (i.e. intensity of work), the scattered nature of work, subsistence work, and work performed under simultaneous activities.(v) The TUS, which collects comprehensive information on all human activities, provides improved estimates of the workforce as well as shed light on important characteristics of the workforce.(vi) The TUS can thus provide critical information to add the richness of the EUS.(vii) The Expert Committee on the 62nd Round of the NSSO on EUS therefore recommended that a national TUS should follow an EUS.

ConclusionIn short, the Indian TUS has missed two important opportunities — of implementing the SDG 5.4 and the ILO’s important resolution.