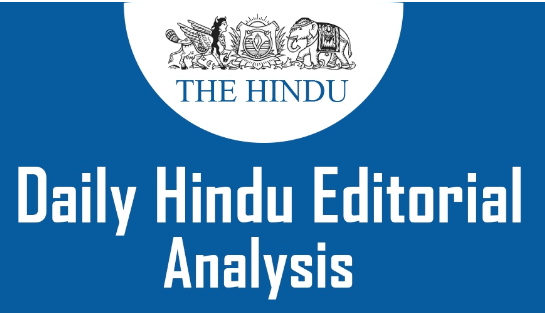 ContextThe bleak(weak) image of a burning pyre(fire) illuminating(light up) a ghastly night while policemen stood guard will be forever etched(remembered) in India’s collective memory.

Atrocity(i) A 19-year-old Dalit girl, who had been allegedly raped and assaulted at Hathras village in Uttar Pradesh on September 14, succumbed(dead) to her injuries on September 29.(ii) She was cremated in the dead of night with the family claiming they had been kept away from her last rites.(iii) This was another unconscionable atrocity(harm) committed in Uttar Pradesh.(iv) The girl was brutally assaulted when she was doing her chores, collecting fodder in the fields along with her mother. Her spinal cord was fractured and tongue slashed(cut).(v) This inhuman act which follows a string of sexual violence cases in Uttar Pradesh and elsewhere in India highlights some grim truths, primarily that the safety of women is not a guarantee despite the stringent laws in place.(vi) After the Nirbhaya rape in Delhi in 2012, the government set up a committee led by Justice J.S. Verma.(vii) On its recommendations, the Criminal Law (Amendment) Act was amended in 2013, bringing in changes to the Indian Penal Code and other laws.(viii) This March, the four convicted of the gang rape of Nirbhaya were hanged to death.Failing To Protect Vulnerables(i) The Uttar Pradesh government has set up a Special Investigation Team to look into the allegations(blame) levelled by the family; the Chief Minister has promised a compensation of ₹25 lakh and “safety”.(ii) That the Chief Minister had to pledge protection is a tacit admission that the administration has failed its most vulnerable citizens.(iii) Caste tension continues to simmer on the ground with its inevitable cycle of humiliation, violence and inequities.(iv) The girl had been forced to drop out of school years ago. The use of sexual violence to oppress lower castes has been on the rise. On the question of protecting women, Uttar Pradesh has slipped(failed) terribly.(v) The latest National Crime Records Bureau data show that Uttar Pradesh registered the highest number of crimes against women in 2019, accounting for 14.7% of India’s total.(vi) Fast-tracking the investigation and ensuring justice is the least authorities can do. But the challenge is to ensure that these tragedies are not forgotten.(vii) Together with increasing gender-sensitivity, the Uttar Pradesh government — and other State governments — must use the law to enhance women’s safety.(viii) Else, those embers(ashes) on a sordid(painful) night may not be the last ones.ConclusionIncreasing gender sensitivity is crucial to enhancing women’s safety.2. CONSTRAINING CRITIQUE: ON AMNESTY HALTING INDIA OPERATIONS-

Context(i) The role played by human rights organisations in documenting and questioning state functioning and excesses is a necessary component of civil society activism, which enhances democracy by securing accountability.(ii) The fact that Amnesty International, which won the Nobel Peace Prize in 1977, had to halt operations in India because of the freezing of its bank accounts and scrutiny from state agencies is therefore unfortunate. Unfair Action(i) The government responded to Amnesty’s decision saying it will not allow “interference in domestic political debates by entities funded by foreign donations”.(ii) This suggests that this denouement(result) is linked to the group’s critical reporting of decisions such as the abrogation(end) of special status for Jammu and Kashmir in 2019.(iii) The group has maintained that it has raised financial resources lawfully.(iv) Amnesty has taken up human rights causes such as minority rights, ending torture, abolition of the death penalty and refugee rights, globally.(v) Advocacy of these causes has led to the group being at loggerheads(opposition) with regimes of various types — from the democratic to the authoritarian — across countries.(vi) India now joins the ranks of countries such as Russia where the group has stopped operations.(vii) There is no doubt that the pursuit of these objectives, even if it is not uniform across a lopsided(uneven) world, has only enhanced and furthered the cause of human rights and their awareness for global citizens.(viii) Democratic regimes that are bound by constitutionalism should not consider critical activism by groups such as Amnesty as being adversarial(conflictual), but instead view it as constructive critique of their functioning.(ix) If the critique is not reasoned, the state can rebut it through communiqués and responses, but should not restrict freedom of expression through intimidation(fear) or restraining actions.Discomfort(i) Central governments in India have consistently registered discomfort with critical civil society organisations over the years.(ii) But the National Democratic Alliance-led government has taken steps to constrain groups even more, especially those that are trans-national in their functioning.(iii) This was exemplified in the monsoon session where amendments to the Foreign Contribution (Regulation) Amendment Act drafted without consulting stakeholders were rushed through Parliament.(iv) For India to aspire to become a developed and a just nation, it must build on its strengths such as its demographic dividend and the procedural institutions that have been built over decades.(v) For it to reap benefits from these advantages, entrepreneurship, governmental actions and other economic tools would be necessary but not sufficient.(vi) The country needs to allow for a vibrant civil society that has spearheaded several reforms related to accountability (the Right to Information Act), welfare (the National Rural Employment Guarantee Act), privacy rights, gender equality and rights of sexual minorities, environmental activism among others.(vi) Non-governmental organisations will continue to have a role to play in this.(vii) It is to be hoped Amnesty’s decision to halt operations is therefore temporary and that it would be able to function within India’s regulatory framework.ConclusionAmnesty’s decision to close shop in India is unfortunate.3. A STRATEGIC DEALING WITH CHINA-

Context(i) On July 2, an article in The Economist was headlined Hit Them Where It Hurts Us: India has few good ways to punish China for its Himalayan land-grab.(ii) It argued that “most economic sanctions would harm India, too”.(iii) Instead of taking knee-jerk(sudden), retaliatory decisions against China following border flare-ups, India should consider joining the rest of the world in reining(controlling) in China and calling it out for its worst excesses.Pragmatism(i) Consider this: Chinese venture capitalists have poured in(invested) more than $8 billion into some of India’s most successful startups.(ii) China supplies many goods and services that India needs, and will continue to need. While India relies heavily on imports from China, a smaller portion of China’s imports are from India.(iii) Further, the timing of the economic decoupling with China that India is attempting could not have come at a worse time.(iv) The Indian economy, which was faring badly even before COVID-19 struck, is badly affected by it. The pandemic is showing no signs of abating(reducing).(v) The situation is not going to get any better over the next few quarters unless India takes pragmatic(practical) steps to overcome these challenges.(vi) On the economic front, India must re-engage with China economically even as it confronts it militarily. Lessons From China(i) In fact, China itself provides lessons on this strategy. China claims Taiwan as its own territory and sometimes threatens invasion.(ii) In August, a top official from Taiwan said that Taiwan faces an increasingly difficult position as China pressures it to accept conditions that would turn it into the next Hong Kong.(iii) But China remains the top destination for Taiwan’s exports and outbound investment.(iv) Trade between the China and Taiwan has remained strong over the past four years.(v) The Taiwanese firm Foxconn, for instance, makes almost all the iPhones that the world buys from factories in China.(vi) Similarly, tensions simmer between China and the its largest trading partner, the U.S., but that doesn’t stop China from continuing to do business with the U.S.(vii) Tesla’s massive car and battery plants are coming up in China and American farmers still sell soya to China, though U.S. soybean exports to China have fallen.(viii) The European Union, China’s second largest trading partner, continues to be robustly(strongly) engaged with China.(ix) A recent report by the Norwegian logistics firm Tschudi bared the surprising extent of overland trade facilitated by rail links established with Europe by China as part of its Belt and Road Initiative (BRI).(x) On this, a report of the China Railway Corporation, cited by Tschudi, makes a telling point that “in the first half of 2017 more than 3,000 container trains” ran between the two continents since the start of 2017.(xi) This exceeded the total for the previous six years combined and serving 35 cities in China, with 34 destinations in Europe”.(xii) Unlike India, which has been talking for years about establishing road and rail connectivity with its immediate neighbours and even Southeast Asia but doing little about it, China’s ambitious BRI is a vision that is being realised in quick time.(xiii) This has now reached India’s doorstep and is bad news for India.No Knee-Jerk Reactions(i) The Brookings Policy Brief of May 2020 titled India’s limited trade connectivity with South Asia 2020 details how “after 2005, China has consistently increased its trade with South Asia”.(ii) It says, “Defying the logic of proximity, most of India’s neighbours are now largely reliant on China for their imports.”(iii) India in fact is in danger of becoming a bit player in its own backyard. China under President Xi Jinping is strategic.(iv) Mark Leonard, the Director of the European Council on Foreign Relations, elaborated on the depth of debate and discussion that goes into Chinese policymaking in his 2008 book What Does China Think.(v) The Chinese American economist, Yukon Huang, makes the same point in far greater detail in Cracking the China Conundrum(problem).ConclusionIndia should listen to these voices and not react in a knee-jerk manner with China.