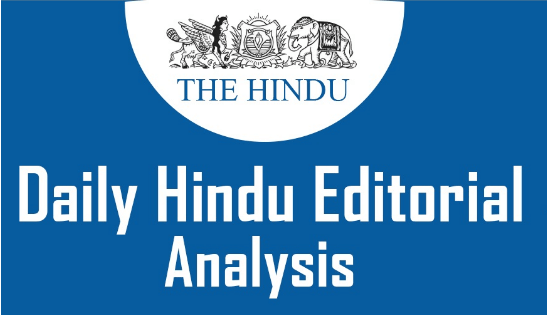 1. A NEW DIMENSION: ON INDIA-U.S.-AUSTRALIA-JAPAN QUADRILATERAL-

Context(i) Chief of Defence Staff stated on Thursday that India believes the Quad would be a “good mechanism” to “ensure Freedom of Navigation Operations” (FONOPs) in the Indian Ocean and surrounding oceans including the Indo-Pacific.(ii) This will be seen as a significant shift of the government’s posture towards the India-U.S.-Australia-Japan Quadrilateral (Quad).The Quadrilateral Security Dialogue and the Indo-Pacific The Indo-Pacific idea expands the conceptual region of Asia-Pacific to include India and the Indian Ocean. The QSD translates this understanding into strategy, envisaging the two oceans as a single security space, which includes India and Japan, is bridged by Australia, and is undergirded by U.S. maritime dominance to balance against the Western Pacific's rising power, China.

Diplomacy- Way Out(i) Unless he misspoke, the suggestion is that India is now prepared to join Quad military patrols, which marks a departure from its earlier reticence(holding back) and public statements by the leadership.(ii) The Indian Navy has not taken part in any joint patrols outside of the Indian Ocean, and even within it, held its first one, with France, only recently.(iii) In terms of the engagement with the Quad, India has not yet formally announced a decision to include Australia in the annual Malabar exercises with the U.S. and Japan, although it is expected to do so.(iv) However, the move from conducting exercises together to joint operations would take time, something that makes the CDS’s assertion significant.(v) It is easy to surmise(guess) that his contention that the Quad operations are needed to ensure there is no “fear of any other nation singularly trying to dominate the oceans”, is a veiled(indirect) reference to China.(vi) It is also clear that the LAC tensions and clashes, as well as the PLA’s refusal to implement border agreements, have convinced New Delhi that new strategies will be required to deal with Beijing.(vii) India continues to engage China diplomatically, and External Affairs Minister and Defence Minister have spoken of the importance of a resolution through talks.(viii) There is no doubt that an outcome of the tensions will be a strengthening of India’s ties with global powers such as the U.S., as well as formations like the Quad.(ix) An indication of this is the government’s plans to host a ministerial-level meeting of the Quad in the next month, possibly when the India-US “2+2” meet of Foreign and Defence Ministers is held.Shedding Reticense(i) While India considers its options, it is necessary to remember some of the reasons for its reticence in terms of militarising the Quad in any way.(ii) Prime Minister Modi said in 2018 that India sees the Indo-Pacific as a “geographical concept”, not a “strategy or a club of limited members”, and it would be important to know whether that formulation has changed.(iii) India is the only Quad member not already tied in a treaty alliance with the others, and Mr. Jaishankar’s statement that India would never be part of any “alliance system” would run counter to what the CDS suggests.(iv) Finally, India is the only country in the Quad that shares a land boundary with China, and it is unclear how the militarisation of the Quad in Indo-Pacific waters would alleviate the territorial threat it faces.(v) If, however, New Delhi’s view of its Quad engagement has shifted, clarity and an expansion of Gen. Rawat’s statement are essential.ConclusionMilitarisation of the Quad will not alleviate the territorial threat India faces from China.2. APPROPRIATE STRATEGY: ON INDIA BANNING MORE CHINA APPS-

ContextThe blocking of a hundred more Chinese mobile applications suggests that the Indian government, not for the first time in recent months, wants to make it amply clear that it will not shy away from leveraging its position as a massive market for technology in dealing with potentially dangerous geopolitical issues. 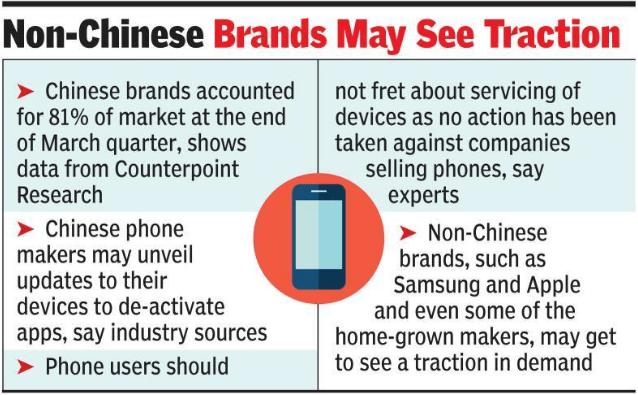 Banning(i) Since June, when border tensions between India and China turned ugly, the government has till now stepped in thrice to block many Chinese applications in one go.(ii) In the latest such decision, on Wednesday, it blocked 118 apps, including the widely popular gaming app, PUBG, as well as WeChat Work and Baidu, owing to these being “prejudicial(risk) to sovereignty and integrity of India, defence of India, security of State and public order”.(iii) Over 200 Chinese apps, which were accessed by millions of Indian users, have been blocked in all till date.(iv) The decision has been taken based on several complaints, a press release said, of these apps “stealing and surreptitiously(hiding) transmitting users’ data in an unauthorized manner to servers which have locations outside India”.(v) It could be argued that loss of access to the Indian market will sharply affect the ambitions of the Internet giants emerging from China, but it remains to be seen if this tech-side intervention is effective as a counter in a geopolitical fight.(vi) Also, how far can India go to keep the Chinese players, who are well entrenched in the global tech supply chain, off the Indian market without prejudicing its own growth?Due Process(i) It is difficult to argue against decisions that are taken on the plank of national security.(ii) But it would be well argued that the Indian approach should have followed due process, where the focus was on ensuring compliance with the law.(iii) Instead, the Indian response to complaints has been to straight away block these apps en masse(in large numbers).(iv) Meanwhile, millions of Indians who were engaging with these platforms, some gainfully, have to scramble(move here and there) for alternatives.(v) To add to this, the data protection law, a dire(crucial) need in this age, is not yet there.(vi) All this does not bode well for a country with aspirations of global leadership of tech, an industry which thrives on global networks and rules.(vii) Ironically, China, which for years has unleashed widespread censorship of information and kept apps from outside off its Internet, has found a rare chance to take the moral high ground.(viii) It has criticised India’s move, accusing it of “abusing the concept of national security”.(ix) The last thing India needs is to be compared with China as far as its Internet regulation goes. It certainly needs a more considered approach to tech regulation.ConclusionWhatever the threat from Chinese apps, India needs a better approach to tech regulation.3. PARLIAMENT STIFLED, BUSINESS, AND A WORD OF ADVICE-

Context(i) The upcoming monsoon session of Parliament, from September 14, is emblematic of the issues faced by legislatures during the novel coronavirus pandemic.(ii) How do these bodies fulfil their central role in a democracy while maintaining health safety of legislators and the staff working in the legislatures? 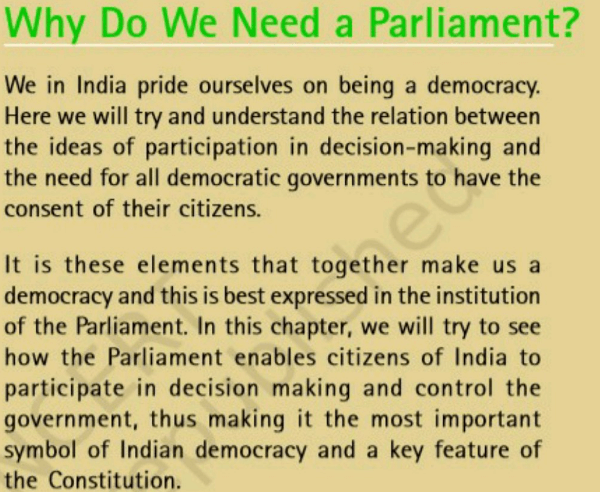