The document The Savanna and Hot Desert Region UPSC Notes | EduRev is a part of the UPSC Course Geography for UPSC CSE.
All you need of UPSC at this link: UPSC 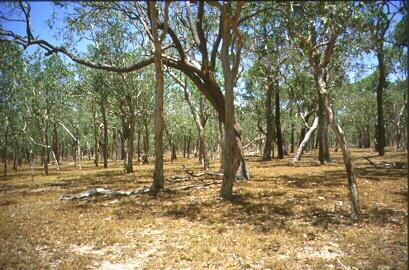 • That is why the Savanna region is also known as the Sudan-type region.• The Savannas are the grass lands of the tropical zone. Therefore, they are also called “Tropical Grass-lands”.Natural EnvironmentsClimate• It is generally hot. The summers are exceptionally hot and the average monthly temperature may rise up to 37°C.• The annual range of temperature is 10° at the most. But the dirunal ranges of temperature are generally much higher than this.• The Savanna region is otherwise a region of the Trade-Wind Belt and the trade winds are dry winds.• The average annual rainfall is variable. There is, however, a general trend of decrease in rainfall as we go further from the equator. Range of variation in rainfall is very wide (from 25 cms to 150 cms).Natural Vegetation• This is a region of seasonal rainfall. Therefore, the characteristic vegetation of this region is grass.• Trees are also to be found growing here and there, but they are of medium height and they belong to the deciduous variety. The trees shed their leaves during winter, which is a dry season.• The Savannas are the natural grass-lands, punctured here and there by deciduous trees. Therefore, they look like Park-lands. 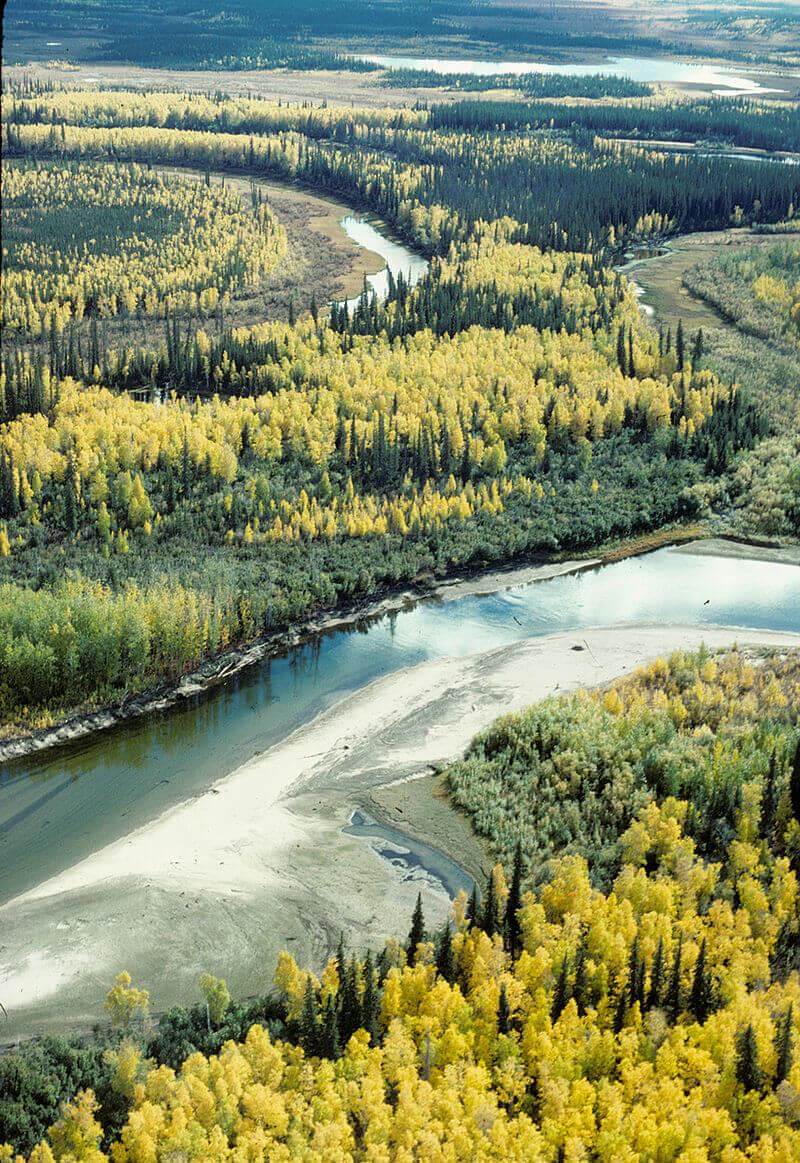 Animal Life• The native animals may be broadly classified into two types:• ‘Grass-eaters’ (Herbivorous): Giraffe, zebra, gazelle, bear and antelopes, elephants, wild buffaloes and rhinoes.• ‘Flesh-eaters’ (Carnivorous): Lion, tiger, leopard, panther, hyena, Jaguar, Puma and Iynx.• Ostrich is a bird of very big size, so much so that it can not fly, but it is very swift footed.• A strange type of animal called ‘Kangaroo’ is found in Australia. It belongs to Marsupial group. One variety of Kangaroos is known as ‘Wallaby’.• In south America, several animals of the ‘rodent-group’ are found, namely Chinchilla, Capybara, Viscacha etc.Cultural Environment• The Savanna regions have remained undeveloped. The native people of Australian Savannas are hunters, who depend for their food on wild game.• They could not become pastoralists, because hoofed animals were not found there.Agriculture• Sugarcane is the most important crop of the Australian Savanna region introduced by the British.• The Portuguese introduced sugar plantations in Brazil.• Cuba is now one of the most important producer of sugar in the world, although the sugarcane growing area is not extensive, the reason is, that the yield of sugar cane per hectare is very high.• Cotton is another important crop, which is being grown in eastern Brazil and northern Argentina.•  Among the plantation-crops of this region, coffee is probably the most important.•  It is grown on the Brazilian highlands and the east African Plateau.Mining surface coal mining• The Savanna countries are not generally important for mining resources.• Venezuela is a famous producer of mineral oil in the world. Brazil has a rich source of iron ore. Jamaica island is noted for its bauxite deposits.• Katanga district of Zaire is famous for copper. Nigeria produces tin and coal. Zimbabwe is famous for chromium and asbestos.Manufacturing• The manufacturing industries, that have been developed here are based chiefly on agricultural raw materials.• Sugar is the most important of all. Cuba, Brazil and Australia are main producers.• Cigarettes and cigars are manufactured in Cuba, Jamaica and Zimbabwe.• Processing of coffee is a factory-industry in Brazil, Ivory Coast and Zaire. Australia and Argentina are known for meat-packing and milk-products.Primitive People of the Savanna Land• The Masais (Pastoralists of Tanzania): Their life is nomadic and they are primarily the herders, lion is their chief game, because lion happens to be the natural enemy of their herds.• The Masais inhabit the border regions of Tanzania and Kenya on the Eastern African Plateau.• “The kikuyus’ of Kenya belong to the intermediate stage of cultural development.• They have originated from Bantu-negroes and their chiefs region is the area lying south of Mt. Kenya. Their mode of life is partly nomadic and partly settled. They are vegetarians.• The ‘Hausas’ of West African states belong to the agriculturist group. They live a settled life and farming is their chief source of livelihood. Long-horned cattle are their favourites.• Their villages are often surrounded by walls for security from Fulani tribes, who are a warlike raiding race.• Settled life has given them opportunity to get skilled in various crafts and they are essentially a trading community.Hot Desert Region 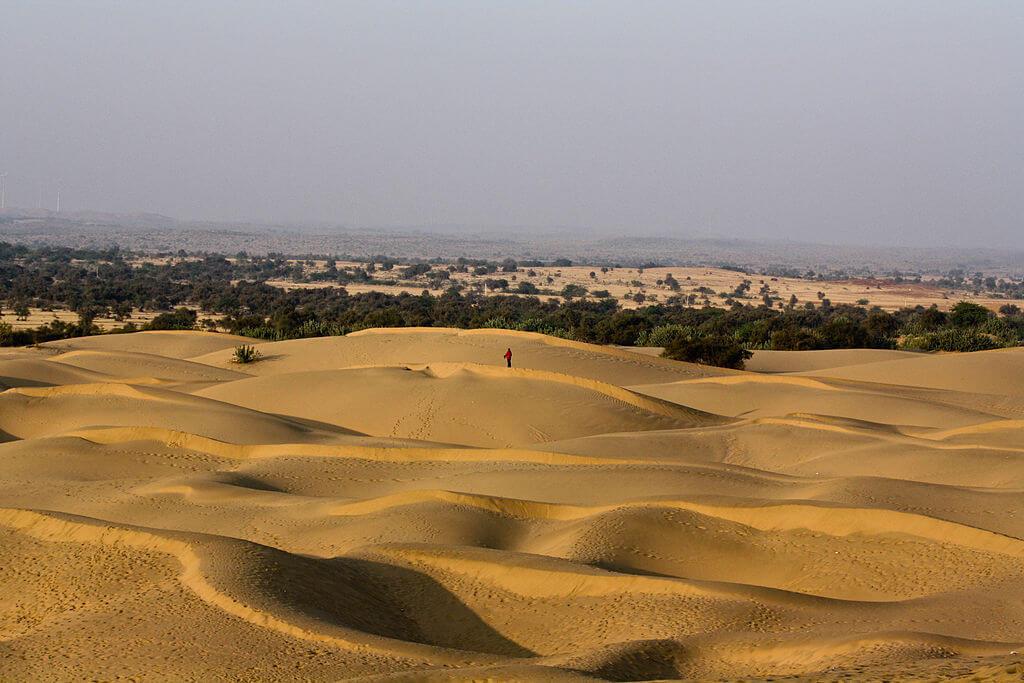 The western state of Rajasthan hosts the large Thar desert in northern India • Location: Hot deserts are located between 20° to 30° latitudes in both the hemispheres on the Western Coast of the Continents.• They are also called “Tropical Deserts” in order to distinguish them from mid-latitude deserts and the cold deserts.• The Hot Deserts are found in the High Pressure belts along the Tropics in the trade winds region.Distribution of Hot Deserts•  Asia—Thar desert and the Arabian Desert.•  Africa—The Sahara and the Kalahari.•  North America—Lower California and Arizona states of the USA.•  South America—Atacama desert.•  Australia—The Great Australian desert.•  The Sahara Desert of Africa is the biggest hot desert area of the world. Therefore, ‘Hot desert’ region is also known as Sahara-type Region.Natural EnvironmentsClimate• Very high temperatures and almost a virtual absence of rain. A great range of temperature.• The reasons for aridity of climate are obvious:• Trade winds are offshore winds, therefore, they are dry.• Air in the sub-tropical high pressure belts is always descending.• It, therefore, becomes drier and drier.• Relative humidity of air in these areas is very low, which is not conducive for formation of clouds.• Evaporation continues unabated so that moisture is hardly to be traced in the soil or in vegetation.World IndustryMajor Industrial centre Related Industry1. Akron  ------------ Synthetic rubber2. New York  ------------Ship building, cotton textiles3. Hamsburg  ------------ Ship building, cotton textiles4. Pittshburgh  ------------ Iron and steel5. Magnitogosk  ------------ Iron and steel6. Tokyo ------------ Cotton textiles and heavy industries7. Moscow  ------------ Ghantali, Bhil, Meena8. Detroit  ------------  Automobiles9. Los Angeles  ------------  Film industry10. Vancouver  ------------  Oil refining & shipbuilding11. Birmingham  ------------  Iron and steel12. Manchester  ------------  Cotton textiles13. Johannesburg  ------------  Gold mining14. Ruhr Valley ------------   Iron and steel15. Osaka ------------  Cotton textile16. Nagasaki  ------------  Ship building17. Shanghai  ------------ Cotton Textiles18. Cairo  ------------  Cotton Textiles19. Ivanvo (Russia) ------------  Cotton Textiles20. Auckland (NZ) ------------   Dairy products21. Baku  ------------  Oil refinery22. Vladivostok  ------------  Lumbering23. Halifax  ------------  Worsted textiles24. Antwerp  ------------  Ship building, petrochemicals25. Houston  ------------  Oil refinery26. Kansas city  ------------  Aircraft27. Kingston ------------   Locomotive28. Quebec ------------   Marine engineering29. Chiba (Japan)  ------------  Marine engineeringNatural Vegetation• The Xerophytic type of vegetation is found. Various kinds of cactus are also found. Grass, scrubs, weeds and bulbous plants are generally seen.• The wiry grasses are very long rooted.• Trees are rarely seen except in an Oasis, where a natural spring or a rock-basin lake may provide water.• Clusters of date plants are a normal sight of an Oasis.• The desert plants have generally no leaves, and if at all they do, the leaves are needle-shaped, hairy and waxy, which reduce the rate of transpiration.Animal Life• The Camel has characteristically adapted to the arid conditions. It is also called the “Ship of the sandy deserts”.• Other animals like, antelopes, jackals, foxes, hyenas, badgers and rabbits are swift runners.• There are the burrowing animals, who live under the surface in order to escape the intense heat. Lizards, rats, ants, snakes belong to this variety.Cultural Environments• Desert-dwellings are generally found on oasis or along the water-courses.• Although pastoralism is the chief mode of life among the desert-dwellers, yet other modes of life are also available.• Desert-dwellers are of 5 types:• The Primitive hunters and gatherers, i.e. the Bushman of Kalahari and ‘Bindibus’ (Black fellows) of Australia.• The Caravan traders: They are found probably everywhere to undertake buying and selling of local products.• Settled cultivators: They are oasis-dwellers, who have developed farming and adopted settled life. The ‘Fellahins’ are the Egyptian farmers inhabiting upper Nile valley.• The Mining settlers: They are the people, who have recently migrated into desert regions for exploitation of mineral resources, of which oil is the most important.• Examples: Oil in the Middle East, Nitrates in Chile, Gold in Australia and Copper and Lead in the USA.• Pastoral Nomads: They are the most important among the Primitive desert-dwellers.• Most of the original inhabitants of the desert region belong to this type. The ‘Bedouins’ of South Arabia are typical “Nomadic pastoralists”.Farming in the Oasis-Regions• The first and foremost vegetation, that thrives on an oasis, is the date palm, because it does not consume enough moisture. Prophet Mohammad called it ‘aunt-palm’.• Rice, maize and millets are produced during summer and wheat and barley are grown in winter. Sometimes an oasis-farmer raises three crops at a time.Farming in the Nile Valley• The Nile river is one of the biggest rivers of the world. Nile River, Uganda • It rises from Lake Victoria and flows towards north meandering over the vast Sahara desert in great loops collecting water of its tributaries.• It is, infact, the life-line of the Eastern Sahara Region, which the territory of Egypt.• The predominant feature of the Nile river is unmistakable regularity of its flood.• The “Fellahins” who were primitive cultivators of the Upper Nile region, utilised the flood-waters for irrigation.• The irrigation-method for utilisation of flood waters practised by the ‘Fellahin’ cultivators is known as “Basin-irrigation”.• Now perennial irrigation has been developed by constructing storage dams across the Nile at Assiut, Aswan and Senar.• An extensive artificial lake known as “Lake Nasser” has been developed behind the Aswan Dam.• Nile-Valley is an important agricultural region, which supplies superior grade cotton to several textile manufacturing countries of the world.• Egypt is indeed the ‘Gift of the Nile’. More than 95% of the Egypt population is concentrated in the Nile Valley. Cairo is the biggest city developed in the valley.Mineral Oil Production in the Middle East• Saudi Arabia: It is the most important mineral oil producer of the Middle East. The important oil fields of Saudi Arabia are: ‘Dhahran’, ‘Abquaiq’, ‘Ghawar’, ‘Qatif’, and ‘Ain-e-Dar’.• The oil refineries are situated at ‘Ras-tanura’ and ‘Dammam’• Iran: The important oil fields of Iran are: ‘Aghajari’ ‘Haft-khel’, ‘Naft-safed’, ‘Gachsaran’ and ‘Lali’. Iranian crude oil is refined by the Abadan oil refinery.• Iraq: The important oil fields of Iraq include: Kirkuk, Khanaquin, Naft-Khaneh, Kaiyarah and Ain-e-Zalah’. Oil refineries are Kirkuk, Khanaquin and Alband.Gold Minings in the Australian Desert• The discovery of gold mines at ‘Kalgoorle’ and ‘Coolgardie’ has made this desert very-very important. They are now connected by railway line with Perth, a port town of Australia. This region producers about 75% of gold of Australia.