UPSC : Theory of Decline of IVC & its Legacy Notes | EduRev

The document Theory of Decline of IVC & its Legacy Notes | EduRev is a part of UPSC category.
All you need of UPSC at this link: UPSC

Evidences Regarding Decline of IVC and Post Harappan Period & its Characteristics

➢ Changes in tools and pottery 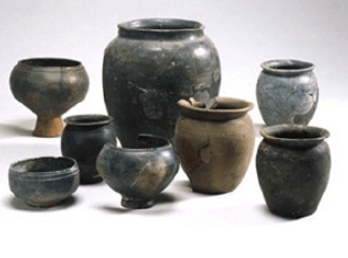 From the above changes between the mature Harappan and the post Harappan period it is clear that the IVC had started to decline around 1900 BC. These are the four popular theories with their particular evidences and limitations that try to explain as to why and how IVC declined:-

(A) Invasion of Aryans

The theory suggests that there was a possible war between the people of IVC and the Aryans who were the horse riding barbarians from the present day Iran. 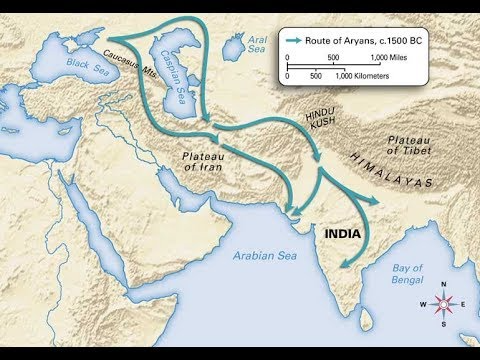 Map of Invasion of Aryans

Try yourself:The discovery, in the upper levels of a Harappan site, of human skeletons lying pell-mell, with a skull having injury mark, shows the invasion and massacre. What is that site?
Explanation

The evidence for the support of Aryan invasion theory clearly states that 30 skeletons from upper levels of Mohenjo-daro were found during excavation in 1920s.

It is hypothesized that overutilization of resources of the Indus river basin led to changes in rainfall patterns. Some also believe that the fertility of soil decreased to an extent that it became difficult for increasing population to be supported by agriculture.  It is also postulated that people of that time were not well equipped to cope up fully with natural disasters such as floods, draughts and earthquakes. 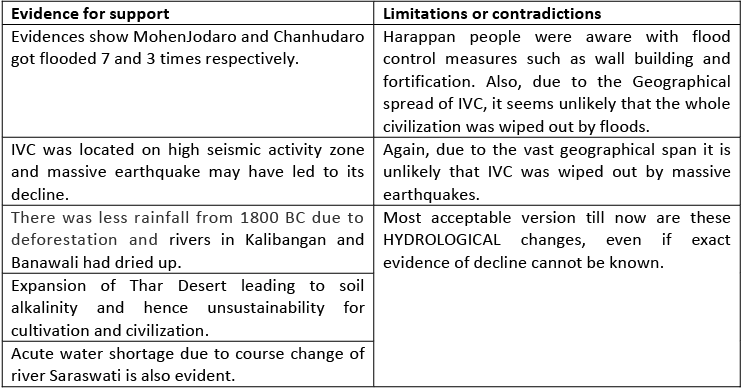 Try yourself:Post-Harappan culture has been found in
Explanation

Post harappan were discovered in the Kalibangan and Banwali. Please read the section on ‘Changes in urban cities in Post-harappan.’

View Solution
Try yourself:Which one of the following was the most suitable reasons, which made the Harappans move away from their urban settlement?
Explanation

At Mohenjo Daro, Jhukar, Chanhudaro, and Amri, there is evidence of a gradual deterioration in the last phases of Harappan occupation. Decline of trading activities and consequential precarious economic conditions may have led to the downfall.

Note: Gordon Childe, Australian-born British historian, linguist, and archaeologist, combined the third theory with the first one and said,“The Indus Civilization perished as a result of internal decay accelerated by the shock of barbarian raids.”

Although it has been nearly 4000 years of IVC flourishment, but its penetrative influence because of its rich legacy and essence has allowed it to play a continuous part in our lives in different domains.(A) Religious Relevance

Note:- The book “Mohenjodaro: A 5000-years old legacy” says that the descendants of the Mohenjodaro people still exist as a minority tribe of fishermen called ‘Mohanas’. Mohenjo-daro, the modern name for the site, has been variously interpreted as "Mound of the Dead Men" in Sindhi, and as "Mound of Mohan" (where Mohan is Krishna)

Try yourself:Which of the following statements shows that there is the legacy of IVC still continues in the economic, social and religious fabrics of our society?
Explanation

The legacy of IVC is wheat being the staple food in north India. The fact that erstwhile Punjab region had agriculture as the primary activity is due to the presence of rivers and implementation of green revolution. It has nothing to do with the continued legacy of agriculture being main occupation during IVC times.
IVC practices matriarchy which is found in kerela and Meghalya.
Prototype of Shiva is found in sculpture, seals and script of IVC – not Krishna Though yogic posture is found in IVC relics and yoga also finds its way in the present civilization, yet Baba Ramdev couldn’t have learned yoga from IVC texts as these are yet to be deciphered.