Q.1. Which of the following is not observed during the apoplastic pathway?     (NEET 2022)(a) The movement does not involve crossing of cell membrane(b) The movement is aided by cytoplasmic streaming(c) Apoplast is continuous and does not provide any barrier to water movement(d) Movement of water occurs through intercellular spaces and walls of the cells

Ans. bInside a plant, the apoplast is the space outside the plasma membrane within which material can diffuse freely. It is interrupted by the Casparian strip in roots, by air spaces between plant cells and by the plant cuticle. The apoplast pathway comprises of non living components of a plant body i.e., intercellular spaces and cell wall. Apoplastic pathway the movement does not involve crossing of cell membrane, symplastic movement is aided by cytoplasmic streaming. Apoplast is continuous and does not provide any barrier to water movement and the movement of water occurs through intercellular spaces and walls of the cells.

Q.2. "Girdling Experiment" was performed by Plant Physiologists to identify the plant tissue through which:     (NEET 2022)(a) Food is transported (b) For both water and food transportation (c) Osmosis is observed (d) Water is transported

Ans. a"Girdling Experiment" was performed by Plant Physiologists to identify the plant tissue through which food is transported. On the trunk of a tree a ring of bark up to a depth of the phloem layer, can be carefully removed. In the absence of downward movement of food the portion of the bark above the ring on the stem becomes swollen after a few weeks. This simple experiment shows that phloem is the tissue responsible for translocation of food and that transport takes place in one direction, i.e., towards the roots.

Ans. aThe greater the concentration of water in a system, the greater is its water potential. If more solute is dissolved in water, the solution has less free water molecules and hence the water potential is decreased.

Q.5. The process responsible for facilitating loss of water in liquid form from the tip of grass blades at night and in early morning is:     (NEET 2020)(a) Imbibition(b) Plasmolysis(c) Transpiration(d) Root Pressure

Ans. dRoot pressure (positive pressure)  can be responsible for pushing up water to small heights in the stem.“It also observable at night and early morning when evaporation is low, and excess water collects in the form of droplets around special openings of veins near the tip of grass blades, and leaves of many herbaceous parts. 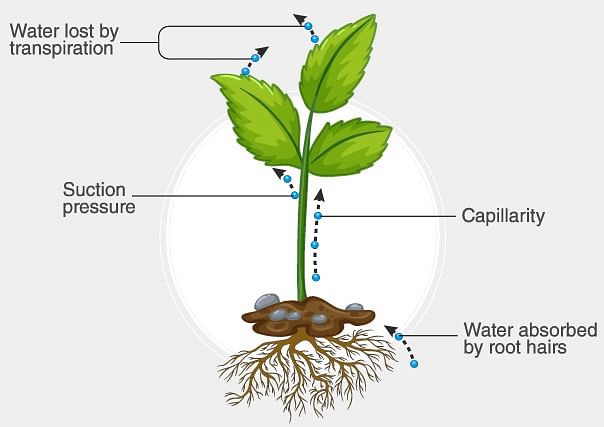 Such water loss in its liquid phase is known as guttation. Imbibition is the adsorption leading to absorption of water by hydrophillic substances. Plasmolysis is the shrinking of the cell membrane and cytoplasm when a cell is undergoing exosmosis. The loss of water in the form of water vapor from the aerial parts of the plant is called transpiration.

Ans. aXylem is a type of transport tissue which is present in vascular plants. The basic function of xylem is transportation. Xylem  majorly transports water from roots to the parts of plants. Some times it also transports nutrients like mineral salts needed by the plant.

Q.7. What is the direction of movement of sugars in phloem?     (NEET 2019)(a) Bi-directional(b) Non-multi directional(c) Upward(d) Downward

Ans. aFood is transported by vascular tissue phloem from a source to sink. Source is a part that synthesises food and sink is a part that stores or needs the food. Since source and sink can be reversed depending on plant’s need, therefore direction of movement of sugar in phloem can be bidirectional, i.e., both upwards or downwards.

Q.8. Which of the following is not a feature of active transport of solutes in plants?     (NEET 2019)(a) Occurs against concentration gradient(b) Non-selective(c) Occurs through membranes(d) Requires ATP

Ans. bWhen turgidity increases within the two guard cells flanking each stomatal aperture or pore, the thin outer wall bulge out and force the inner walls into a crescent shape. This results in the opening of stomata. The opening of stomata is also aided by the radial orientation of cellulose microfibrils in the cell wall of guard cells rather than longitudinal orientation.

Q.13. A few drops of sap were collected by cutting across a plant stem by a suitable method. The sap was tested chemically. Which one of a following test results indicates that it is phloem sap?     (NEET 2016)(a) Acidic(b) Alkaline(c) Low refractive index(d) Absence of sugar

Ans. bPhloem sap is generally alkaline with pH ranging from 7.3 - 8.5 and contains high levels of  K+ and Mg2+. Hence, the chemical test for alkalinity will help to identify that the exudated sap is phloem sap. So, the correct answer is 'Alkaline'.

Q.14. Water vapour comes out from the plant leaf through the stomatal opening. Through the same stomatal opening carbon dioxide diffuses into the plant during photosynthesis. Reason out the above statements using one of following options.     (NEET 2016)(a) Both processes cannot happen simultaneously.(b) Both processes can happen together because the diffusion coefficient of water and CO2 is different.(c) The above processes happen only during night time.(d) One process occurs during day time, and the other at night.

Ans. bIn actively growing plants, water is continuously evaporating from the surface of leaf cells through stomatal opening exposed to air. This is called transpiration. Through the same stomatal opening carbon dioxide diffuses into the plant during photosynthesis. Simultaneously as both are the process of simple diffusion occurs in order of diffusion pressure gradient or diffusion coefficient.

Q.16. A column of water within xylem vessels of tall trees does not break under its weight because of:     (NEET 2015) (a) Tensile strength of water(b) Lignification of xylem vessels(c) Positive root pressure(d) Dissolved sugars in water

Ans. aDue to tensile strength of water, a column of water within xylem vessels of tall trees does not break  under its weight.

Ans. dActive absorption creates root pressure. In this process, the expenditure of energy takes place for the movement of substances against concentration gradient.

Ans. aPistia a hydrophyte plant where absorption of water by root is not important.

The document NEET Previous Year Questions (2016-22): Transport in Plants - Notes | Study Biology Class 11 - NEET is a part of the NEET Course Biology Class 11.
All you need of NEET at this link: NEET
Attempt Now
Join Course