The document Tribunals- Need and Provisions Notes | EduRev is a part of the UPSC Course Indian Polity for UPSC CSE.
All you need of UPSC at this link: UPSC

Tribunal is a quasi-judicial institution that is set up to deal with problems such as resolving administrative or tax-related disputes. It performs a number of functions like adjudicating disputes, determining rights between contesting parties, making an administrative decision, reviewing an existing administrative decision and so forth.(i) The term ‘Tribunal’ is derived from the word ‘Tribunes’, which means ‘Magistrates of the Classical Roman Republic’.

(ii) A Tribunal, generally, is any person or institution having an authority to judge, adjudicate on, or to determine claims or disputes – whether or not it is called a tribunal in its title.Need of Tribunal 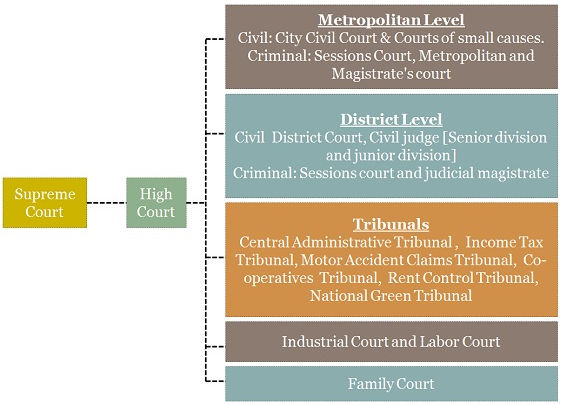 (i) Tribunals were not part of the original constitution, it was incorporated in the Indian Constitution by 42nd Amendment Act, 1976.

(ii) Under Article 323 B, the Parliament and the state legislatures are authorised to provide for the establishment of tribunals for the adjudication of disputes relating to the following matters:

(iv) Article 262: The Indian Constitution provides a role for the Central government in adjudicating conflicts surrounding inter-state rivers that arise among the state/regional governments.Tribunals in India

Armed Forces Tribunal (AFT)(i) It is a military tribunal in India. It was established under the Armed Forces Tribunal Act, 2007.(ii) It has provided the power for the adjudication or trial by AFT of disputes and complaints with respect to commission, appointments, enrolments and conditions of service in respect of persons subject to the Army Act, 1950, The Navy Act, 1957 and the Air Force Act, 1950.(iii) Besides the Principal Bench in New Delhi, AFT has Regional Benches at Chandigarh, Lucknow, Kolkata, Guwahati, Chennai, Kochi, Mumbai and Jaipur.

(iv) The Judicial Members are retired High Court Judges and Administrative Members are retired Members of the Armed Forces who have held the rank of Major General/ equivalent or above for a period of three years or more, Judge Advocate General (JAG), who have held the appointment for at least one year are also entitled to be appointed as the Administrative Member.National Green Tribunal (NGT)(i) The National Environment Tribunal Act, 1995 and National Environment Appellate Authority Act, 1997 were found to be inadequate giving rise to demand for an institution to deal with environmental cases more efficiently and effectively.(ii) The Law Commission in its 186th Report suggested multi-faceted Courts with judicial and technical inputs referring to the practice of environmental Courts in Australia and New Zealand.

(iv) The Tribunal is mandated to make and endeavour for disposal of applications or appeals finally within 6 months of filing of the same.(v) Initially, the NGT is proposed to be set up at five places of sittings and will follow circuit procedure for making itself more accessible.