There are two types of pie charts: 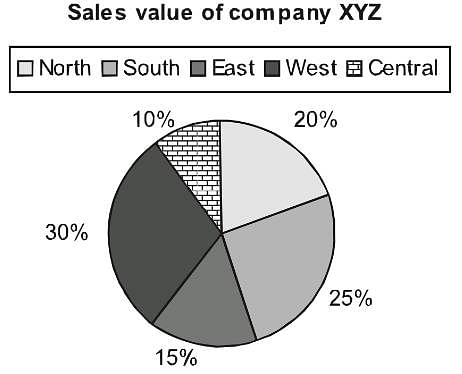 This displays the contribution of each component of the pie. 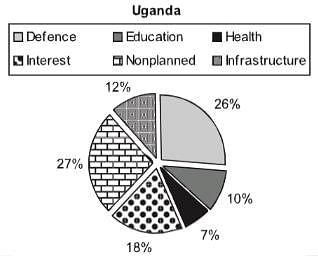 It is conventional to have multiple pie charts related to the same paragraph question to determine different aspects & drawing comparisons between the data. Once in CAT 2018 aspirants like you were posed with a multi-layered pie chart question like below; let’s solve the same pie chart to understand the concept better. 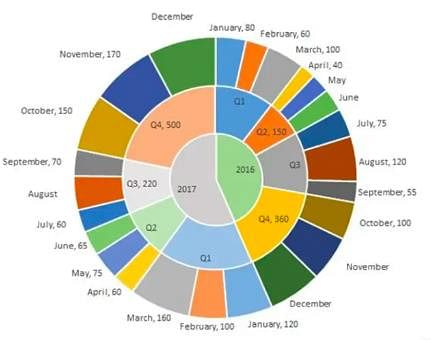 The multi-layered pie-chart below shows the sales of LED television sets for a big retail electronics outlet during 2016 and 2017. The outer layer shows the monthly sales during this period, with each label showing the month followed by sales figure of that month. For some months, the sales figures are not given in the chart. The middle-layer shows quarter-wise aggregate sales figures (in some cases, aggregate quarter-wise sales numbers are not given next to the quarter). The innermost layer shows annual sales. It is known that the sales figures during the three months of the second quarter (April, May, June) of 2016 form an arithmetic progression, as do the three-monthly sales figures in the fourth quarter (October, November, December) of that year. 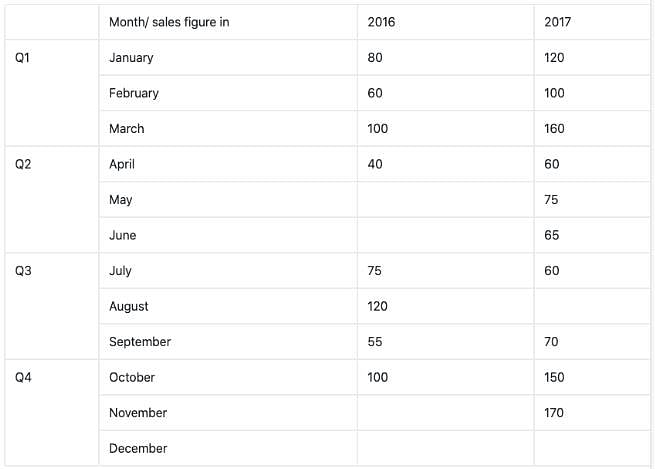 As you can see in the above table there a few month’s sales are missing and we need to evaluate them first from the given information and then find the answers to above given question. 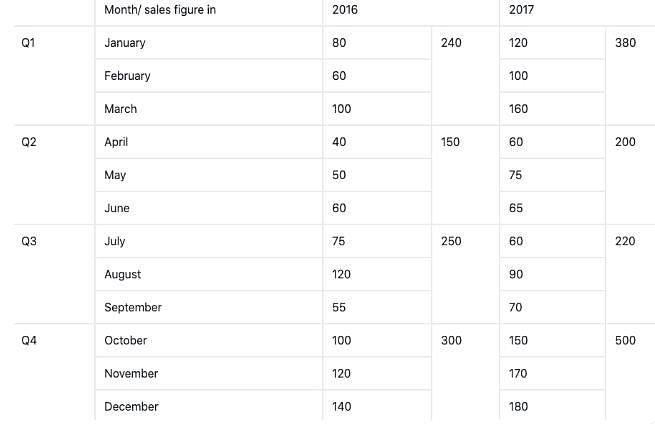 Now we are in position to answer all the given questions using the above table.Ans 1: Percentage increase in sales of Dec’17 as compared to Dec’16 =Ans 2: We need to evaluate the quarter with the highest increase in sales in percentage terms.

Practice Questions:
Question for Types of Pie Charts
Try yourself:During which quarter was the percentage decrease in sales from the previous quarter’s sales the highest?
Explanation

View Solution
Question for Types of Pie Charts
Try yourself:During which month was the percentage increase in sales from the previous month’s sales the highest?
Explanation

In this question you don’t need to find the percentage rise for all the months as you can clearly notice in the options that comparison is given only for march and October 2016 and 2017. Thus, find out the percentage rise for these months and you are done.
Also, notice that the rise in sales for October’17 is highest compared to Sep’17. The sale got more than double from 70 to 150. Hence, October’17 answer is the correct answer.
As the above examples depict the questions are pretty straightforward for pie charts. But we still recommend you to practice a good amount of questions to get fluent with this topic. So, keep Practicing!