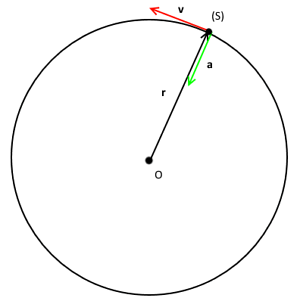 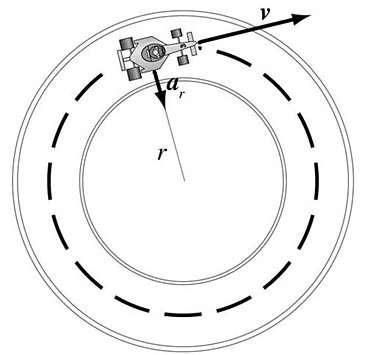 If a particle is moving in a circle, it must have some acceleration acting towards the centre which is making it move around the centre. Since this acceleration is perpendicular to the velocity of a particle at every instant, it is only changing the direction of velocity and not magnitude and that’s why the motion is uniform circular motion. We call this acceleration centripetal acceleration (or radial acceleration), and the force acting towards the centre is called centripetal force.In the case of uniform circular motion, the acceleration is:ar = v2r = ω2rIf the mass of the particle is m, we can say from the second law of motion that:F = mamv2r= mω2rThis is not a special force, actually force like tension or friction may be a cause of origination of centripetal force. When the vehicles turn on the roads, it is the frictional force between tyres and ground that provides the required centripetal force for turning.

Note: So if a particle is moving in a uniform circular motion:

Following are the examples of uniform circular motion:

Solved Question for You

Q.1. During the course of a turn, an automobile doubles its speed. How much must additional frictional force the tires provide if the car safely makes around the curve? Since Fc varies with v2, an increase in velocity by a factor of two must be accompanied by an increase in centripetal force by a factor of four.A satellite is said to be in geosynchronous orbit if it rotates around the earth once every day. For the earth, all satellites in geosynchronous orbit must rotate at a distance of 4.23×107 meters from the earth’s center. What is the magnitude of the acceleration felt by a geosynchronous satellite?Solution: The acceleration felt by any object in uniform circular motion is given bya = v2 ÷ rWe are given the radius but must find the velocity of the satellite. We know that in one day, or 86400 seconds, the satellite travels around the earth once. Thus:

(b) The net force that acts on the object to keep it moving along a circular track is called centripetal force whose magnitude is found using Newton's second law as belowFnet = mac = 120 × 2 = 240NQ.3. A race car travelling around a circular path of a radius of 400 m with a speed of 50 m/s. Find the centripetal acceleration of the car.Solution: In a circular motion with constant speed the centripetal acceleration is ac = v2/r. Therefore, substituting the numerical values into this equation we have

The document Uniform Circular Motion Notes | Study Physics For JEE - JEE is a part of the JEE Course Physics For JEE.
All you need of JEE at this link: JEE
Join Course