Till date there has been 14 people who have occupied the office of the Prime Minister of India which in terms of parties they represent are as under; 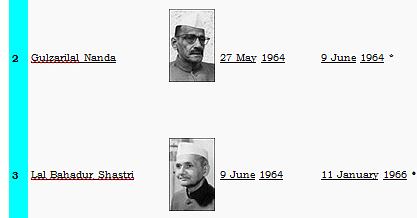 ♥ Returned to Office  ♦ Dismissed by President following a no-confidence motion

It is convention that, after the change of the Government, the Attorney-General resigns and the new Government appoints one of its own choices.

• He is appointed by the President for a full term of 6 years or 65 years of age whichever is earlier.

• To audit the accounts of the Union and the States and submit the report to the President or the Governor, as the case may be.

• To ensure that all the expenditures from the Consolidated Fund of India or States are in accordance with the Law.

• To oversee that the money sanctioned by the Parliament or the State Legislature is being spent for the particular purpose for which it has been issued.

• Also, to audit and report on the receipts and expenditure of the

The report of the CAG relating to the accounts of a State shall be submitted to the Governor of the State, who shall cause it to be laid before the Legislature of the State. This report is immediately referred to the Public Accounts Committee of the Parliament which, after a detailed study prepares another report which is placed before the Parliament. The discussion in the Parliament takes place on the secondary report of the Public Accounts Committee.

The CAG is an officer of the Parliament and he is called Ears and Eyes of the Public Accounts Committee.

The CAG has no control over the issue of money from the Consolidated Fund of India or of any State.

The CAG is concerned only at the stage of audit after the expenditure has already taken place.

The current CAG of India is Shashi Kant Sharma, who was appointed on 23 May 2013. He is the 12th CAG of India

Usually, there is a Governor for each State, but the Constitution (seventh amendment) Act of 1956, facilitated the appointment of the same person as a Governor for two or more States or Lt. Governor of the Union Territory.

Conditions for Governor to be appointed:

The constitution lays down the following conditions for the Governor's office:

His emoluments and allowances should not be diminished during his term of office.

introduced to the State Legislature, the annual budget and also the

·         He can grant pardons, reprieves, respites and remissions of punishment or suspend, remit and commute the sentence of any person convicted of any offence against any law relating to a matter to which the executive power of the State extends.

·         The pardoning power of the Governor differs from that of the President in following respects:

o    The President can pardon death sentence while the Governor cannot.

o    The President can pardon sentences inflicted by the Court martial while the Governor cannot.

·         He is consulted by the President while appointing the Judges of the concerned State High Court.

·         He makes appointment, postings and promotions of the District Judges in consultation with the State High Court (Art 233).

·         He also appoints persons to the Judicial Services of the State (other than District Judges) in consultation with the State High Court and the State Public Service Commission.

·         If the Governor is satisfied that the Government of the State cannot be carried on in accordance with the provisions of the Constitution, he may, under Art, 356 recommend to the President to impose the President's rule (Constitutional Emergency) in that State.

·         As soon as the President’s Rule is imposed, the administration of the State is carried on by the Governor acting as the representative of the President.

On the qualification of a Governor, the Commission recommended:

a)    He should be eminent in some walk of life;

b)    He should be a person from outside the state

c)     He should be a detached figure without intense political links, or should not have taken part in politics in recent past

d)    He should not be a member of the ruling party

On the process of appointment, the Commission recommended that

·         Effective consultation should be made with the state chief minister in selection of a person for the post of Governor.

·         Vice-President of India and Speaker of Lok Sabha should be consulted by the Prime Minister before selection of the Governor.

On the removal, the Commission suggested that

b)    The Governor should be removed before their tenure only on the grounds as mentioned in the Constitution or if aspersions are caste on his morality, dignity, constitutional propriety etc.

c)     In the process of removal, state government may be informed and consulted.

·         The recently appointed National Commission for the Review of Working of Constitution under the chairmanship of Justice Venkatachalliah has adopted the recommendation of Sarkaria Commission as aforesaid. Dr Ambedkar in the constituent Assembly debate also referred that each state is sovereign in its own sphere and this unnecessary encroachments are unjustified.

·         Reservation of a bill for the consideration of the President.

·         Recommendation for the imposition of the President's rule in the State.

·         While exercising his functions as the administrator of an adjoining Union Territory (in case of additional charge).

·         Appointment of the Chief Minister when no party has clear cut majority in the State Legislature.

·         Seeking information from the Chief Minister with regard to the administrative and legislative matters of the State.

·         Dismissal of the Council of Ministers when it cannot prove the confidence of the State Legislative Assembly.

·         Dissolution of the State Legislative Assembly if the Council of Ministers has lost its majority.

·         Determining the amount payable by the State of Assam to the autonomous Tribal District Council as royalty accruing from licenses for mine exploration.

·         The Governor has certain special responsibilities to discharge according to the directions issued by the President. In this regard, the Governor though has to consult the Council of Ministers, acts finally in his individual judgment and discretion. They are:

i.        Maharashtra: Establishment of a separate Development Boards for

iii.        Arunachal Pradesh: With respect to the law and order in the State.

iv.        Assam: With respect to the administration of the Tribal areas.

vi.        Manipur: With respect to the administration of the hill areas in the State.

vii.        Sikkim: For peace and for ensuring social and economic advancement of the different sections of the population.

viii.        Gujarat: Establishment of a separate Development Boards for Saurashtra and Kutch.

Ø  Any person can be appointed as minister, but he ceases to be minister if he does not remain a member of the state legislature for a period of six consecutive months.

Ø  The salaries and allowances of Ministers are governed by laws made by the state legislature.

Ø  The Chief Minister is the real executive and is the head of the Government of a State.

Ø  The Chief Minister shall be appointed by the Governor.

Other Ministers shall be appointed by the Governor on the advice of the Chief Minister.

In relation to the Council of Ministers

In relation to the State Legislature

(2) It shall be the duty of the Advocate-General to give advice to the Government of the State upon such legal matters, and to perform such other duties of a legal character, as may from time to time be referred or assigned to him by the Governor, and to discharge the functions conferred on him by or under this Constitution or any other law for the time being in force.

(3) The Advocate-General shall hold office during the pleasure of the Governor, and shall receive such remuneration as the Governor may determine