The document Union Territories in India- 1 UPSC Notes | EduRev is a part of the UPSC Course Indian Polity for UPSC CSE.
All you need of UPSC at this link: UPSC

Under Article 1 of the Constitution, the territory of India comprises three categories of territories:(a) Territories of the states(b) Union territories(c) Territories that may be acquired by the Government of India at any time. Table : Articles Related to Union Territories at a Glance 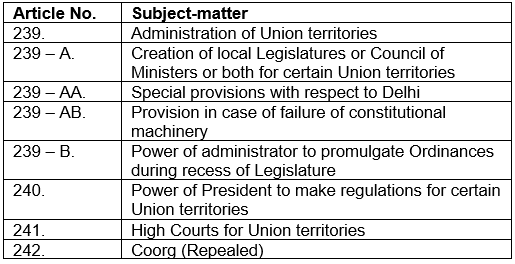