Correct Answer is Option DAn example of the taproot system is a mustard plant. In most of the dicotyledonous plants, the radicle directly elongates to form the 'primary root' which grows inside the soil. The primary root along with its branches constitutes the 'tap root system.

In the turnips, the modified roots store the food.

These types of roots change their structure for adapting to the environment they grow. They can be further classified into seven types and the storage root is one of them in which the plants store food.

Correct Answer is Option A

Trees are big and tall plants. They have very thick, woody and hard stems called the trunk.

Stem - This part bears branches and leaves.The stem gives structural support to the plant. It bears branches, leaves, flowers and fruits. The stem carries water and minerals from the roots to different parts of the plant.

Fruit -  This part is formed from a flower.Fruits are produced only by flowering plants

Leaf - This part is green and helps to produce food.Chlorophyll is a pigment that gives plants their green color, and it helps plants create their own food through photosynthesis.

Flower - It is brightly coloured.This is because bright colors help attract these species and other animals, often enticing them to land on the flower.

Answer the following questions in brief

Question 10: What is the difference between taproot and fibrous roots?

Question 11: What functions does a stem have? What are stomata?

The primary functions of the stem are to support the leaves; to conduct water and minerals to the leaves, where they can be converted into usable products by photosynthesis; and to transport these products from the leaves to other parts of the plant, including the roots.

Stomata are the tiny openings present on the epidermis of leaves. In some of the plants, stomata are present on stems and other parts of plants. Stomata play an important role in gaseous exchange and photosynthesis. They control the transpiration rate by opening and closing.

Question 12: Where is the food made by plants stored?

Plants make food in their leaves by the process called photosynthesis. The leaves contain a pigment called chlorophyll, which can make food for the plant using carbon dioxide, water, nutrients, and energy from sunlight. The main way that food is stored in plants is as starch.

Question 13: List some of the functions of the root.

The structure of roots helps them perform their primary functions. What do roots do? They have three major jobs: absorbing water and minerals, anchoring and supporting the plant, and storing food.

Question 14: Name the components required by leaves for making food.

Plants make food in their leaves. The leaves contain a pigment called chlorophyll, which colors the leaves green. Chlorophyll can make food the plant can use from carbon dioxide, water, nutrients, and energy from sunlight. This process is called photosynthesis.

Question 15: Label the following parts of a plant. Draw a similar picture in your notebook. 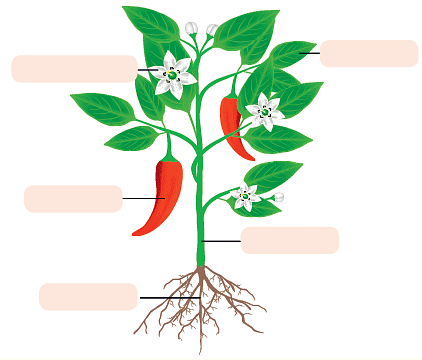