Who discovered the electrons?

SOME EXTRA INFORMATION REGARDING YOUR QUESTION:-
There are three subatomic particles namely, electrons, protons and neutrons. To learn the name of the scientists who have discovered all these sub atomic particles there is a trick.

Thanks a lot Kinza and Anshu..

Thanks a lot for the information Kanchan .

OK thanks @Kanchan for the information

Smriti Tripathi answered 3 weeks ago
Irish physicist George Johnstone Stoney named this charge 'electron' in 1891, and J. J. Thomson and his team of British physicists identified it as a particle in 1897. Electrons can also participate in nuclear reactions, such as nucleosynthesis in stars, where they are known as beta particles.

Alisa Ferrari answered 3 weeks ago
JJ Thomson is your answer.

Eren Jaeger answered 3 weeks ago
J J Thomas discovered electrons. Experiments with beams of negative particles were performed in britain led to his conclusion in 1897 that they consisted of lightweight particles with a negative electric charge, nowadays known as electrons. Thomson was awarded the 1906 Nobel Prize.

It is not J.J Thompson it is J.J Thombson Dcod Fine.

Ak Thakur answered 3 weeks ago
During the 1880s and ’90s scientists searched cathode rays for the carrier of the electrical properties in matter. Their work culminated in the discovery by English physicist J.J. Thomson of the electron in 1897.

Paritosh Singh answered 3 weeks ago
Hey Buddy,
If you like my answer then please Upvote it and follow me.
So your answer is -
Electrons were discovered by J.J Thompson in 1897.
Thank You.

@AdarshAdarsh I am not begging...Actually I am asking because there are some people who read the answer but they don't Upvote it...I am sorry if I have caused any trouble to you... 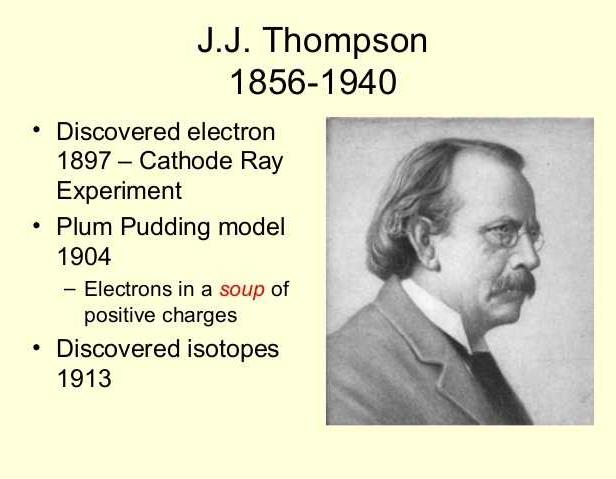 Diana Nair answered 3 weeks ago
J.J Thombson is the one who discovered the electron.There are electrons , protons and neutrons in an atom.The proton and neutrons remain in the nucleus itself but electron move around the nucleus.

Sir Joseph John Thomson OM PRS was a British physicist and Nobel Laureate in Physics, credited with the discovery of the electron, the first subatomic particle to be discovered.

Priya Choudhary answered 3 weeks ago
The electrons that revolves around the nucleus of the atoms was discovered by J.J Thomson by performing the cathode ray tube experiment .

Yrr ab to unblock kr do