The document Introduction - Law of Tort, Notes CLAT Notes | EduRev is a part of the CLAT Course Legal Reasoning for CLAT.
All you need of CLAT at this link: CLAT

The word tort has been derived from the Latin term ‘tortum’ which means ‘to twist’. It includes that conduct which is not straight or lawful but on the other hand, twisted, crooked or unlawful.

Section 2(m) of the Limitation Act,1963, Addresses tort as being a civil wrong which is not just exclusively a breach of contract or a breach of trust.

Try yourself:Tort means a civil wrong which is not exclusively a breach of contract or breach of trust. This definition is from statutory
Explanation

Section 2(m) of the Limitation Act,1963, Addresses tort as being a civil wrong which is not just exclusively a breach of contract or a breach of trust.

Some Important Definitions of Tort

While no specific definition of tort has been possible which could be unanimously agreed by all the thinkers, certain attempts to define tort have been made, and will be listed below:

“Tortious liability arises from the breach of a duty primarily fixed by law; this duty is towards persons generally and its breach is redressible by an action or unliquidated damages.”

“It is a civil wrong for which the remedy is a common-law action for unliquidated damages and which is not exclusively the breach of a contract or the breach of a trust or other merely equitable obligation.”

Essentials of a Tort

Following two conditions should be satisfied to constitute a tort:

Table 1: Distinction between Tort and Crime. Try yourself:Crime is a breach of public rights afffecting whole society whereas Torts is _____.
Explanation

Torts is an infringement of private or civil right of indical. A tort affects the private rights of a person. A crime on the other hand affects the whole society.

View Solution
Table 2: Distinction between Tort and Breach of Contract. 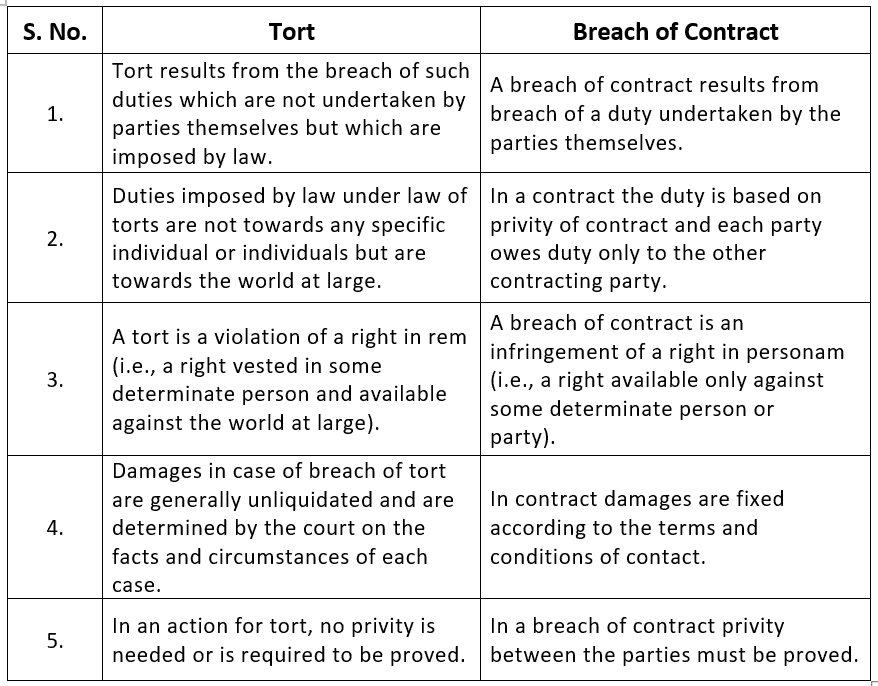 Try yourself:Tort is a violation of:
Explanation

Distinction between Tort and Breach of Trust

Two important maxims explain this concept and liability in torts. They are:

In the case of Mayor & Bradford Corporation Vs. Pickles (1895), Pickles was annoyed by the refusal of Bradford Corporation to purchase his land for their water undertaking. Out of spite, he sank a shaft on his land, which had the effect of discolouring and diminishing the water of the Corporation, which percolated through his land.

The House of Lords held that the action of Pickles was lawful and no matter how ill his motive might be, he had a right to act on his land in any manner that so pleases him.

Explanation – There is no violation of the legal right . Explained in Glouster Grammer school case. Ashby vs White(1703) is a leading case explaining the maxim, injuria sine damnum.

Ashby vs White(1703) is a leading case explaining the maxim, injuria sine damnum.