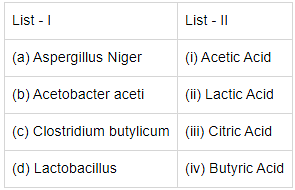 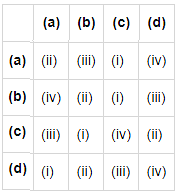 Q2. Which of the following is put into Anaerobic sludge digester for further sewage treatment?         [NEET 2020]

Major portion of activated sludge is pumped into large tanks called anaerobic sludge digesters. So, here other kinds of bacteria which grow anaerobically, digest the fungi and bacteria of the sludge. 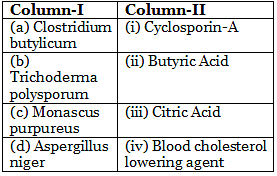 Q4. Which of the following can be used as a biocontrol agent in the treatment of plant disease?     [NEET 2019]

Correct Answer is Option (B)Trichoderma species are free-living fungi that are very common in the root ecosystems. They are effective biocontrol agents of several plant pathogens.

Q6. Which of the following is a commercial blood cholesterol-lowering agent?    [NEET 2019](a) Lipases(b) Cyclosporin A(c) Statin(d) Streptokinase

Q.7. Match the following organisms with the products they produce.    [NEET 2019] 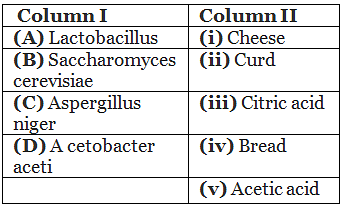 A good biocontrol agent should be species-specific and inactive on non-target organisms. 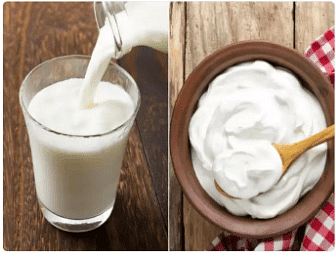 Correct Answer is Option (B)Primary or physical treatment is the process of removal of small and large, floating and suspended solids from sewage through two processes of filtration and sedimentation.

Q12. Which of the following is correctly matched for the product produced by them?     [NEET 2017](a) Methanobacterium: Lactic acid(b) Penicillium notatum: Acetic acid(c) Sacchromyces cerevisiae: Ethanol(d) Acetobacter aceti: Antibiotics

Correct Answer is Option (C)Methanobacterium is useful in the production of biogas. Penicillium notation is used to product, penicillin, an antibiotic. Acetobacter aceti is used to obtain acetic acid.

Q13. Match column I with column II and select the correct option using the codes given below.  [NEET 2017]

Correct Answer is Option (B)Clostridium butylicum helps in the production of butyric acid. Candida Upolytica and Geotrichum candidmn help in production of lipases that are added in detergents for removing oily stains from laundry.

Q16. The primitive prokaryotes responsible for the production of biogas from the dung of ruminant animals, include the   [NEET 2016](a) Halophiles(b) Thermoacidiophiles(c) Methanogens(d) Eubacteria

Correct Answer is Option (C)Methanogens are microorganisms that produce methane as a metabolic byproduct in anoxic conditions. They are obligate anaerobic ancient and primitive bacteria. They are involved in methanogenesis.

Correct Answer is Option (B)Anaerobic digestion is a series of processes in which microorganisms break down biodegradable material in the absence of oxygen, used for industrial or domestic purposes to manage waste and/or to release energy. The process of anaerobic digestion produces a biogas, consisting of methane (it will burn), carbon dioxide (it does not burn) and traces of other contaminant gases.

The document NEET Previous Year Questions (2016-21): Microbes in Human Welfare Notes | Study Biology Class 12 - NEET is a part of the NEET Course Biology Class 12.
All you need of NEET at this link: NEET
Join Course