Q.1. Which of the following is not an application of PCR (Polymerase Chain Reaction)?      (2021)(a) Purification of isolated protein(b) Detection of gene mutation(c) Molecular diagnosis(d) Gene amplificationAns. (a)Solution. However, very low concentration of a bacteria or virus (at a time when the symptoms of the disease are not yet visible) can be detected by amplification of their nucleic acid by PCR. It is being used to detect mutations in genes in suspected cancer patients too.

Q.2. When gene targetting involving gene amplification is attempted in an individual's tissue to treat disease, it is known as:       (2021)(a) Molecular diagnosis(b) Safety testing(c) Biopiracy(d) Gene therapyAns. (d)Solution.  Gene therapy is a collection of methods that allows correction of a gene defect that has been diagnosed in a child/embryo.

Q.4. With regard to insulin choose correct options.      (2021)(a) C-peptide is not present in mature insulin.(b) The insulin produced by rDNA technology has C-peptide.(c) The pro-insulin has C-peptide.(d) A-peptide and B-peptide of insulin are interconnected by disulphide bridges.Choose the correct answer from the options given below.(a) (a), (c) and (d) only(b) (a) and (d) Only(c)  (b) and (d) only(d) (b) and (c) onlyAns. (a)Solution. 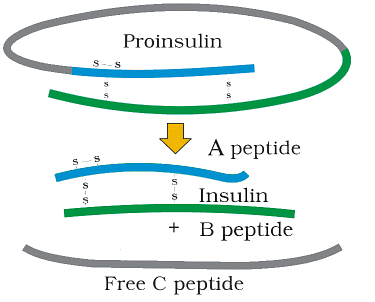 You know that for effective treatment of a disease, early diagnosis and understanding its pathophysiology is very important. Recombinant DNA technology, Polymerase Chain Reaction (PCR) and Enzyme Linked Immuno-sorbent Assay (ELISA) are some of the techniques that serve the purpose of early diagnosis. 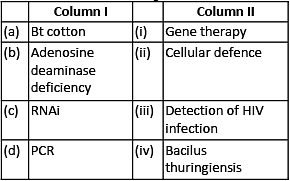 The document NEET Previous Year Questions(2016-21): Biotechnology & Its Applications Notes | Study Biology Class 12 - NEET is a part of the NEET Course Biology Class 12.
All you need of NEET at this link: NEET
Join Course