THE UNION AND ITS TERRITORYArticles 1 to 4 under Part — I of the Constitution deal with the Union and its territory. 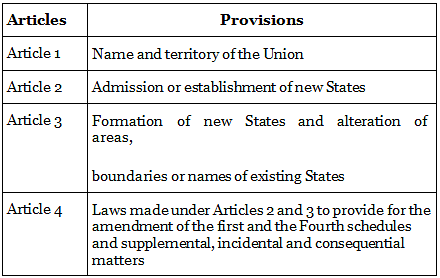 INDIA— A UNION OF STATES

Article 1. Name and territory of the Union

Article 1 of the Constitution describes India, that is, Bharat as a ‘Union of States’. The reasons behind this were made clear by Dr. B.R. Ambedkar in the Constituent Assembly. Ambedkar said that the Indian federation was a “Union” because it was Indissoluble, and no State had a right to secede from the Indian Union. He said: “The Drafting Committee wanted to make it clear that though India was to be a federation, the federation was not the result of an agreement by the States to join in a federation, and that the federation not being the result of an agreement, no State has the right to secede from it. The federation is a Union because it is indestructible. Though the country and the people may be divided into different states for convenience of administration, the country is one integral whole, its people a single people living under a single imperium derived from a single source. The Americans had to wage a civil war to establish that the States have no right of secession and that their federation was indestructible. The Drafting Committee thought that it was better to make it clear at the outset rather than to eave it to speculation or to dispute.”

The phrases ‘Union of India’ and ‘Territory of India’ need to be distinguished. The Union of India includes only the States which enjoy the status of being members of the federal system and share a distribution of powers with the Union. The Union Territories are not included in the “Union of States” whereas the expression “Territory of India” includes not only the States, but also the Union Territories and such other territories as may be acquired by India. The States and the Territories, thereof, are specified in the First Schedule of the Constitution.Article 2. Admission or establishment of new StatesParliament may by law admit into the Union, or establish, new States on such terms and conditions as it thinks fit. Under Article 2, the Constitution vests power with Parliament for the admission or establishment of new States. By using this power Parliament has admitted, for example, the French settlements of Pondicherry, Karaikal, Mahe and Yanam, the Portuguese settlements of Goa, and Daman and Sikkim, etc., into India. Article 2 relates to admission or establishment of new states that were/are not part of the India. On the other hand, Article 3 deals with establishment or creation of new states after reorganization of existing states which are already parts of India.Procedure for the formation of new States and alteration of areas, boundaries or names of existing States

Article 3. Formation of new States and alteration of areas, boundaries or names of existing States.

Parliament may by law

Under Article 3, the Constitution empowers Parliament to form a new State by separation of territory from any State or by uniting two or more States or parts of States or by uniting any territory to a part of any State. The Constitution further states that Parliament has the power to increase or diminish the area of any State or to alter the boundaries or names of any State. However, Parliament has to follow certain procedures in this regard. A Bill giving effect to any or all the changes stated above can be introduced in either House of the Parliament, only on the recommendation of the President. If such a Bill affects the boundary or name of a State, then the President, before introducing it in the Parliament, shall refer the Bill to the State Legislature concerned for its opinion, fixing a time limit within which an opinion may be expressed by the State Legislature. The President may extend the time limit so specified. If the State Legislature fails to express an opinion within the stipulated time limit then it is deemed that it has expressed its views. If it submits its views within the period so specified or extended, Parliament is not bound to accept or act upon the views of the State Legislature. Further, it is not necessary to make fresh reference to the State Legislature every time an amendment to the Bill is proposed and accepted. The Bill is passed with simple majority.

However, in the case of Union Territories, it is not necessary to obtain the views of Legislatures of Union Territories before a Bill affecting their boundaries or names is introduced. For example, such Bills in respect of Mizoram, Arunachal Pradesh and Goa, Diu and Daman were introduced in Parliament without obtaining such views. Article 3, thus demonstrates the vulnerability and dependence of the States’ territorial integrity on the Union whereas in federations like the USA or Australia, the boundaries or names of States cannot be altered by the federation without the consent of the States.Changes in the Constitution consequential to any reorganization of statesArticle 4. Laws made under Articles 2 and 3 to provide for the amendment of the First and the Fourth Schedules and supplemental, incidental and consequential matters.

Article 4 allows for consequential changes in the First Schedule (names of the States in the Union of India) and Fourth Schedule (number of seats each State is allotted in the Rajya Sabha). It also says that sys that no law altering existing States or creating a new State will be considered a constitutional amendment. It is in line with the earlier provisions of requirement of only simple majority in the Parliament and suggests the complete control of Union over territories of individual States of the Union.