Indian Architecture, Sculpture & Pottery is a very important topic in respect to UPSC CSE. Let’s have a look at the summary of Nitin Singhania’s book to understand better.Indian Architecture: Architecture refers to the design and construction of buildings. It generally uses a mixture of various types of materials like stone, wood, glass, metal, sand, etc. It involves the study of engineering and engineering mathematics. It requires detailed and accurate measurements.Sculpture: Sculptures are relatively smaller 3-dimensional works of art. A single piece of the sculpture is usually made of a single type of material. Sculpture involves creativity and imagination and may not depend as heavily on accurate measurements.Pottery: Pottery is the process and the products of forming vessels and other objects with clay and other ceramic materials, which are fired at high temperatures to give them a hard, durable form. Major types include earthenware, stoneware and porcelain. 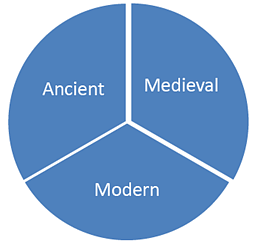 Ancient India and its Architecture

Harappan Architecture: The Indus Valley is one of the world's earliest urban civilizations, along with its contemporaries, Mesopotamia and Ancient Egypt. At its peak, the Indus Civilization may have had a population of well over five million.

What is Extensive Town Planning?

➢ The Great Granary at Harappa: Extensive town planning was the characteristic of this civilization, which is evident from the gridiron pattern for the layout of cities, some with fortifications and elaborate drainage and water management systems. 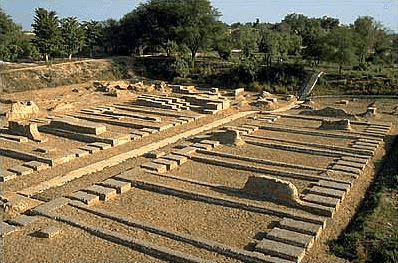 What are the types of Harappan Sculptures? 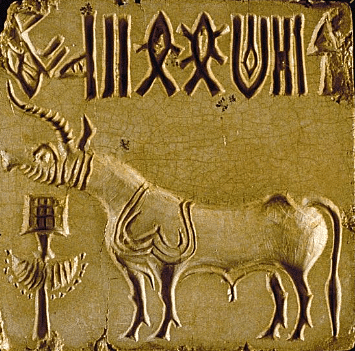 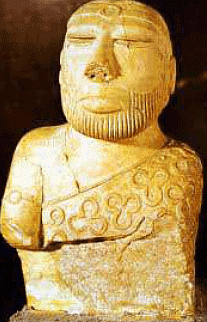 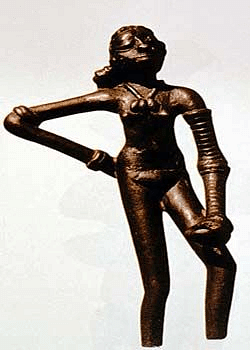 The Pashupati Seal is a steatite seal that was discovered at the Mohenjo-daro archaeological site of the Indus Valley Civilization. The seal depicts a seated figure that is possibly tricephalic (having three heads). It was once thought to be ithyphallic, an interpretation that is now mostly discarded. The man has a horned headdress and is surrounded by animals. He may represent a horned deity. The seal is kept in the National Museum of India in New Delhi

View Solution
(b) What is The Mauryan Art And Architecture?

1. Mauryan court Art-PalacesSome of the monuments and pillars belonging to this period are considered as the finest specimens of Indian art. The Mauryan architecture was embalmed in timber, for rocks and stones were not as freely in use then. The art of polishing of wood reached so much perfection during the Mauryan period that master craftsmen used to make wood glisten like a mirror.In 300 B.C., Chandragupta Maurya constructed a wooden fort 14.48 km long and 2.41km wide, along the Ganges in Bihar. However, only a couple of teak beams have survived from this fort. 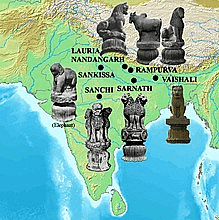 The pillars have four parts:(i) The shafts are always plain and smooth, circular in cross-section, slightly tapering upwards and always chilled out of a single piece of stone.(ii) The capitals have the shape and appearance of a gently arched bell formed of lotus petals.(iii) The abaci are of two types: square and plain and circular and decorated and these are of different proportions.(iv) The crowning animals are either seated or standing, always in the round and chiselled as a single piece with the abaci.

The Sarnath pillar is one of the finest pieces of sculpture of the Ashokan period erected in 250 BC. Here, four lions are seated back to back. The four lions symbolize power, courage, confidence and pride. This Lion Capital of Ashoka from Sarnath has been adopted as the National Emblem of India and the wheel "Ashoka Chakra" from its base was placed onto the centre of the National Flag of India. At present the Column remains in the same place where Lion Capital is at the Sarnath Museum.

The Sarnath Pillar is one of the finest pieces of sculpture of the Ashokan period erected in 250 BC. Here, four lions are seated back to back. The four lions symbolize power, courage, confidence, and pride. This Lion Capital of Ashoka from Sarnath has been adopted as the National Emblem of India and the wheel "Ashoka Chakra" from its base was placed onto the center of the National Flag of India. At present the Column remains in the same place where Lion Capital is at the Sarnath Museum. 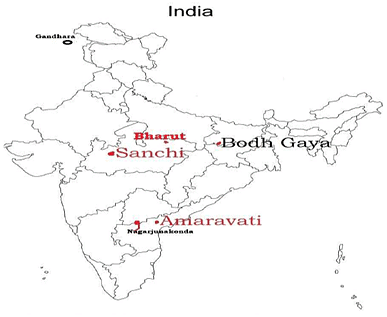 The stupas built for a variety of reasons, Buddhist stupas are classified based on form and function into five types:(i) Relic stupa - In which the relics or remains of the Buddha, his disciples and lay saints are interred.(ii) Object stupa - In which the items interred are objects belonged to the Buddha or his disciples such as a begging bowl or robe, or important Buddhist scriptures.(iii) Commemorative stupas - Built to commemorate events in the lives of Buddha or his disciples.(iv) Symbolic stupa - To symbolise aspects of Buddhist theology, for example, Borobudur is considered to be the symbol of "the Three Worlds (dhatu) and the spiritual stages (bhumi) in a Mahayana bodhisattva's character."(v) Votive stupas - Constructed to commemorate visits or to gain spiritual benefits, usually at the site of prominent stupas which are regularly visited.

The shape of the stupa represents the Buddha, crowned and sitting in meditation posture on a lion throne. His crown is the top of the spire; his head is the square at the spire's base; his body is the vase shape; his legs are the four steps of the lower terrace, and the base is his throne. 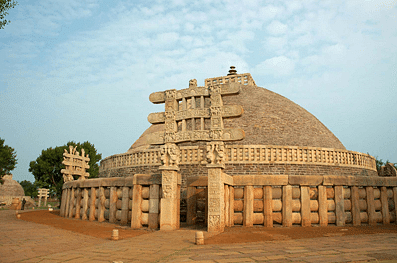 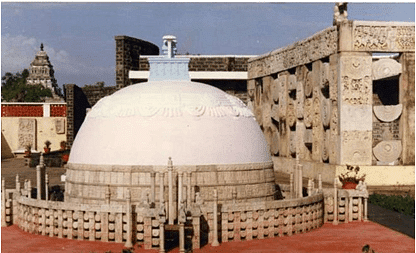 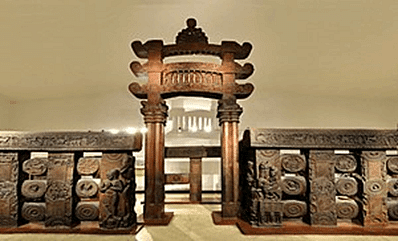 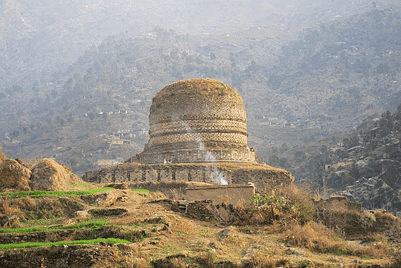 - Amaravati Stupa, built-in 2nd or 1st century BC was probably like the one at Sanchi, but in later centuries it was transformed from a Hinayana shrine to a Mahayana shrine.
- Amaravati Stupa is different from the Bharhut and Sanchi stupas. It had free-standing columns surmounted by lions near the gateways. The dome was covered with sculptured panels.
- The Stupa had an upper circumambulatory path on the drum as at Sanchi. This path had two intricately carved railings. The stone is greenish-white limestone of the region. 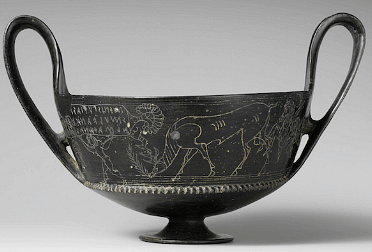 The pottery associated with the Mauryan period consists of many types of wares. But the most highly developed techniques were seen in a special type of pottery known as Northern Black polished ware (NBPW), which was the hallmark of the preceding and early Mauryan Periods. 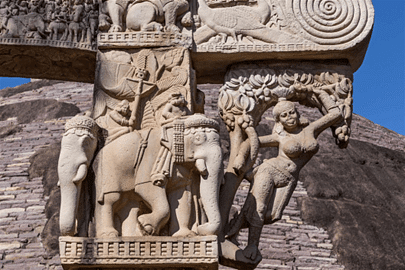 Yakshini Sculpture in a Torana at Sanchi Stupa

(c) Post Mauryan Art
After the decline of the Mauryan Empire in 2nd century BC, small dynasties sprang up in various parts of north and south India. 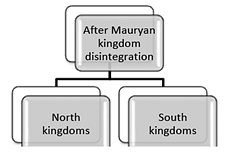 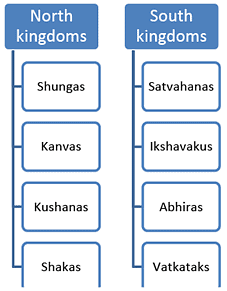 ➢ Post Mauryan Period - ArchitectureThe north and south dynasties made advances in art and architecture in areas like stone construction, stone carving, symbolism and beginning of temple (or chaitya hall-prayer halls) and the monastery (or vihara-residential halls) constructions. 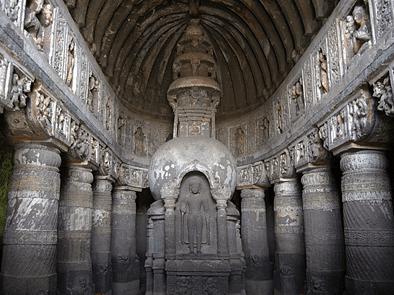 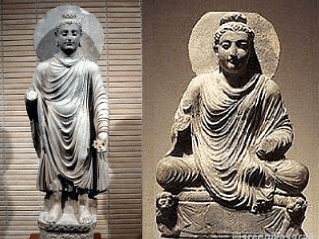 What are the important characteristics of Gandhara school are?

(ii) The Mathura School of Art 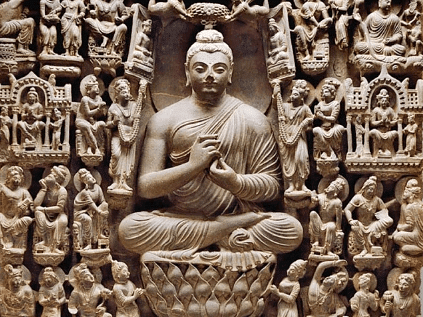 The Mathura School of art flourished at the city of Mathura between 1-3 A.D. and was promoted by the Kushans. It established the tradition of transforming Buddhist symbols into human form.

(iii) The Amravati School of Art 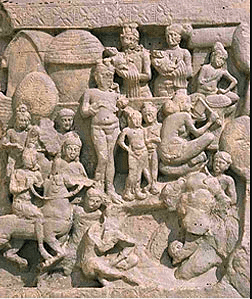 The Amravati school of Art evolved during Satavahna period. This school of art developed at Amravati, on the banks of the Krishna River in modern Andhra Pradesh. It is the site for the largest Buddhist stupa of South India. The stupendous stupa could not withstand the ravages of time and its ruins are preserved in the London Museum. This school of art had a great influence on art in Sri Lanka and South-East Asia as products from here were carried to those countries.

Do you Prefer Videos over Blogs? If yes, watch Indian Architecture, Sculpture & Pottery- 1 to understand better!

In this document you have learnt